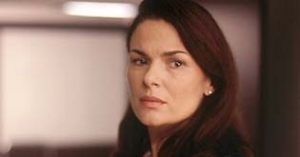 Barbara Auer, born February 1, 1959, in Konstanz, grew up as the eldest of four children in a staunchly Catholic home. After finishing school, Auer went to Hamburg and enrolled at Hochschule für Musik und Darstellende Kunst. In 1981, she made her stage debut at Stadttheater Mainz, went to Städtische Bühnen Osnabrück in 1983 and was a cast member at Schauspielhaus Wuppertal from 1986 to 1988. Furthermore, Auer made her movie debut in Alexander Kluge's 1982 film "Die Macht der Gefühle" (The Power of Emotion). In 1988, Auer won the Goldene Kamera for her portrayal of GDR crane operator Jessica in Vivian Naefe's TV movie "Der Boss aus dem Westen". Like in this film, Auer has often been seen in parts of down-to-earth, yet modern and self-confident women.

In 1993, Auer won the German film prize in Gold, for "Meine Tochter gehört mir" (My Daughter Belongs to Me), again directed by Vivian Naefe. Furthermore, Auer starred in leading roles in Sherry Horman's "Frauen sind was wunderbares" (1994) und in Frank Beyer's TV movie "Nikolaikirche" (1995). In 2001, Auer was again nominated for the German film prize for her performance in Christian Petzold's "Die innere Sicherheit" (The State I Am In). In this film, Auer played a former terrorist who is leading an underground existence together with her husband and her daughter. They have to hide from the police so that her daughter cannot lead a normal teenager's life.

In the following years, Auer starred for instance in Margarethe von Trotta's film "Ich bin die Andere" (I Am the Other Woman, 2006). She also played leading roles in several TV dramas such as Thorsten Näter's "Einfache Leute" (2006). In 2007, Barbara Auer was again nominated for the German film prize as "best supporting actress" for her performance in "Der Liebeswunsch" (Impossibly Yours), an adaptation of the novel by Dieter Wellershoff directed by Torsten C. Fischer.