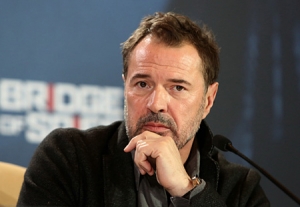 Sebastian Koch at the press conference on the occasion of the international premiere of "Bridge of Spies - Der Unterhändler" at the Adlon in Berlin on November 13, 2015

Sebastian Koch, born May 31, 1962, in Karlsruhe, started his acting career at Munich's Otto Falckenberg drama school that he attended from 1982 to 1985. Following drama school, Koch performed at theatres in Ulm and Darmstadt and became a cast member of the well-known Schillertheater in Berlin in 1990.

From the beginning of the 1990s on, Koch also started to appear in international movie and TV productions, such as the episodic movie "Flirt", directed by the American auteur filmmaker Hal Hartley. Koch made his breakthrough performance with the portray of RAF terrorist Andreas Baader in Heinrich Breloer's highly praised TV movie "Todesspiel". Koch then assured his name as a character actor with parts in Rolf Schübel's "Ein Lied von Liebe und Tod – Gloomy Sunday" ("Gloomy Sunday") and Roland Suso Richter's two-part TV movie "Der Tunnel" ("The Tunnel").

In 2002, Koch became the first actor in 30 years to win two Grimme prizes: one for his part as kidnappee Richard Oetker in "Tanz mit dem Teufel" (Dance With The Devil"), and one for his portrayal of novelist Klaus Mann in Heinrich Breloer's award-winning "Die Manns – Ein Jahrhundertroman". Cinema goers saw Koch in the successful new adaptation of the children's book classic "Das fliegende Klassenzimmer" ("The Flying Classroom") or in the thriller "Tödlicher Umweg" ("Deadly Diversion").

In 2006, Koch made his international breakthrough in a leading role in Florian Henckel von Donnersmarck's award-winning drama "Das Leben der Anderen" ("The Lives of Others"). Koch convinced movie goers with his intense and complex portrayal of a GDR artist whose life is systematically destroyed by the Stasi. Shortly after "The Lives of Others", Koch also proved his comic talent in the (human) leading role of the family comedy "Rennschwein Rudi Rüssel 2" ("Rudy - The Return of the Racing Pig"). But in Paul Verhoeven's international production "Black Book", Koch returned to a far more serious topic. In this drastic Nazi drama, Koch stars as a morally ambivalent Wehrmacht officer.

"In jeder Sekunde" (2008), the directorial debut of cinematographer Jan Fehse, saw Koch as a successful physician experiencing a marriage crisis. Next he was one of the leads in Hermine Huntgeburth's adaptation of Fontane's "Effi Briest" (2009).

His portrayal of the title character in a TV adaptation of Jack London's "Der Seewolf" (CDN/D 2009) garnered Koch an Emmy nomination. Starring opposite Klaus Maria Brandauer, he played a public relations manager and alleged spy in the thriller "Manipulation" (CH/D 2011); in the international co-production "Unknown Identity" (USA/F/D 2011), he appeared as a scientist in mortal danger.

He again displayed his full range as a character actor in Nina Grosse's drama "Das Wochenende" (2013), playing a former Red Army Faction terrorist who meets with his old associates – one of whom betrayed him to the police.

Koch went on to star in a string of international productions, including the Greek-Russian period piece "O Theos agapaei to haviari" ( 2012), the Czech thriller "Ve stínu" ("In the Shadows"), which garnered him a nomination at the Czech Film Awards, and Mike Figgis' "Suspension of Disbelief" (2012). Moreover, director Ridley Scott cast him in a pivotal role in the TV drama "The Vatican" (2013).

After landing the prestigious role of the villain opposite Bruce Willis in "A Good Day to Die Hard" (US 2013), he starred in Götz Spielmann's acclaimed drama "Oktober November" (AT 2013) and played Alfred Nobel in the TV production "Eine Liebe für den Frieden" (2014). Remaining a high profile, Koch next appeared in Tom Hooper's "The Danish Girl" (US/UK 2015) and had a recurring role in the TV series "Homeland".

In the French-German-Belgian co-production "Im Namen meiner Tochter - Der Fall Kalinka" ("Bamberski: The Kalinka Case", 2016), he played the German physician and rapist Dieter Krombach who after decades of jurisdictional disputes was finally sentenced to a lengthy prison term in 2012. Koch portrayed another dark character, the physician Valentin Faltlhauser (in the film called Walter Veithausen) who carried out euthanasia killings for the Nazis, in "Nebel im August" ("Fog in August", 2016). For his haunting performance, Koch received the Günter-Rohrbach-Filmpreis. In the same year, he appeared in a supporting role as the rich father of a rebellious teenager whose boot camp is taken over by kidnappers in the British action thriller "Take Down". Sebastian Koch was also a member of the ensemble in Florian Henckel von Donnersmarck's "Werk ohne Autor" (2017), a drama based on the life of the painter Gerhard Richter.