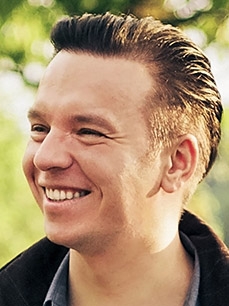 Piotr Lewandowski was born in Warsaw on June 29 1975. After studying in Warsaw and London, he enrolled at the Hochschule für Gestaltung in Offenbach in 1999. In 2002, he transferred to the Filmakademie Baden-Württemberg, from which he graduated in 2007.

Already since 1996, he had been directing shorts and commercials, and worked as a 3D animation artist. Following successful shorts like "Heavy Pregnant" and "Papa", he and Carsten Strauch co-directed the feature film "Die Aufschneider" ("Cutting Edge", 2007).

In 2009, Lewandowski's half-hour feature "Fliegen" screened at the Berlin IFF. Again teaming up with Strauch – whom he also cast as an actor in nearly all his films – he next helmed the award-winning TV series "Götter wie wir" (2011/2012). In 2013, Lewandowski, Strauch and Rainer Ewerrien received a Grimme Award nomination for "Götter wie wir". The same year, Lewandowski won the screenplay award at the Hessische Film- und Kinopreis for his then un-filmed script "Jonathan".

After completing "Zwischen Erde und Licht" (2014), a documentary on Polish artist Wanda Dück, Lewandowski began production on "Jonathan". The drama about a young farmer's son who takes care of his terminally ill father premiered in the Panorama section of the 2016 Berlin IFF, and received a special prize at the 2016 Festival des deutschen Films in Ludwigshafen.