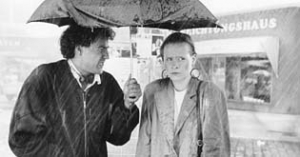 The film tells the story of a Turk and his clever life planning shortly after the German reunification. After the fall of the Berlin wall, he wants to return to his home country but does not have enough money to do so. Soon, he develops the idea to work in the Western part where the wages are higher, and to live in the Eastern part where the housing and living costs are much lower. At the same time, he is looking for a girl with large flat to move in with her. But the actual execution of his plan leads to several unexpected difficulties.