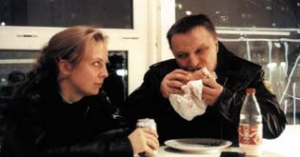 The Policewoman
Concrete blocks, high-rise flats, grey voids of streets and monstrous shopping centres. The atmosphere in this problem district of Rostock is gloomy, even when the sun is shining. And it is here of all places that Anne arrives after completing her police training in Berlin.

The 27-year-old, ordinary but by no means unattractive policewoman has no ties, and privately she is hoping for a new start, too. But everyday police work is dominated by slow-moving bureaucracy and the daily, more or less meaningful struggle with crime of every kind. Dealing with people whose reality is shaped by social poverty proves difficult for Anne; she is not always able to avoid getting involved. And her relationship to her colleague Mike is also ambivalent; on the one hand she is attracted to him, but as she is all too aware, he is married and has two small children. But when Anne meets up with ten-year-old Benny, who has no stability in his family and has been pilfering in supermarkets, she decides to look after him - and so meets Benny′s father Jegor, a small time Russian crook, to whom she feels strangely attracted. But Jegor cannot satisfy Anne′s longings, either ...