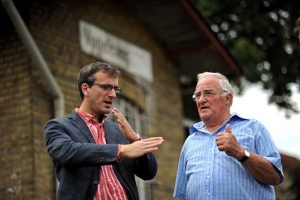 Henryk from the Back Row

Henryk Wichmann is a trained lawyer and the father of three daughters; he is also an MP for Germany’s CDU in Potsdam. This young and breezy backbencher is always ready to counter the governing coalition of SPD and Linkspartei. When parliament is not in session he travels about his Uckermark constituency. It is one of the largest in Germany, but sparsely populated and marked by high unemployment. The popular belief that politicians are becoming increasingly distanced from their constituents does not apply to Wichmann. He for one is right in the thick of things and does not shy away from the tasks that make up an MP’s daily grind: whether he is asked to sort out broken doors on slow trains, preserve the number of police stations in the remoter countryside, or make sure that certain cycle paths aren’t built because they would jeopardise the lesser spotted eagle – an endangered species. Whenever he is out on his long trips through Brandenburg’s wide open spaces he enjoys relaxing to classical music – but nonetheless, he’s often dead beat of an evening...

After his documentary "Herr Wichmann von der CDU" which screened in the Panorama in 2003, Andreas Dresen returns in his new work to explore afresh the workings of grass-roots democracy. The results are sometimes farcical and sometimes contain sardonic overtones – for after all, failure is all part of the game.