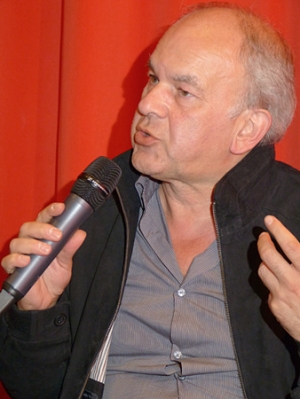 Bernd Böhlich, born 1957 in Dresden, at first worked as an assistant director for Deutscher Fernsehfunk in Berlin after finishing school. He then studied directing at Filmhochschule Potsdam-Babelsberg and got invited to several international film festivals with his graduation film "Fronturlaub" (1981/82). Since his graduation, Böhlich works as an author and director and has made several TV movies covering different genres: His films range from "feel good" movies such as the Christmas movie "Alles Samba" (2003), starring Gudrun Landgrebe, to more prestigious films such as the filmic biography of Axel Springer, "Der Verleger" ("The Publisher"), starring Heiner Lauterbach.

Böhlich won the Adolf Grimme award for his sibling drama "Landschaft mit Dornen" (1992) starring Ben Becker as well as for his epsiode for the crime series "Polizeiruf 110", "Totes Gleis" (1994). In 2007, Böhlich made his debut on the big screen with the social realistic comedy "Du bist nicht allein". The same year he wrote and directed the TV production "Krauses Fest", the first film about provincial police officer Krause, a highly popular character which was originally introduced in the crime series "Polizeiruf 110". The film was followed by the sequels "Krauses Kur" (2009) and "Krauses Braut" (2011).

In 2008, the melancholic romance "Der Mond und andere Liebhaber" ("The Moon and Other Lovers") marked Böhlich's second cinema release. "Bis zum Horizont, dann links!" ("Fly Away"), a comedy about a group of senior citizens who stage a spectacular escape from their resident home, was released in Summer 2012.

Although the film received good reviews and was notably successful with 200,000 visitors, Böhlich went back to exclusively shooting for television in the next few years, for example the thriller "Der Feind in meinem Leben" (2013) about a policeman (Matthias Koeberlin) who becomes the stalker of the figure skater Katarina Witt (played by herself). He also directed the "Polizeiruf 110" episode "Vor aller Augen" (2013), the "Stubbe - Von Fall zu Fall" episode "Der König ist tot" (2014) and three episodes of the popular "Krause" crime series (2014, 2016, 2019).

At the Filmkunstfest Schwerin in May 2019, Bernd Böhlich presented another feature film: "Und der Zukunft zugewandt" ("Sealed Lips"), about a GDR citizen and committed communist whose husband was shot by the Soviets at the end of the Second World War for no apparent reason.