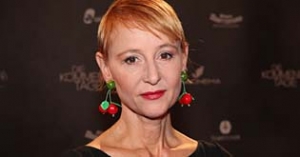 Susanne Lothar, born November 15, 1960, in Hamburg, as the daughter of the actors' couple Hanns Lothar and Ingrid Andree mainly worked as a theatre actress after graduating from drama school at Hamburg's Hochschule für Theater und Musik. For a couple of years, Lothar was a cast member of Deutsches Schauspielhaus in Hamburg, where she for instance starred in the title role of the startling production of Frank Wedekind's play "Lulu".

In 1983, Lothar made her debut on the movie screen in the unconventional relationship drama "Eisenhans" ("Strange Fruits") – and promptly won the German film award for her performance. However, Lothar remained true to the theatre: Until the end of the 1990s, she appeared only sporadically in film and TV productions. In 1987, she won the well-known O.E. Hasse award, one year later, the theatre magazine "Theater heute" named her "Actress of the year".

But Lothar did not seem to get too excited with the film business before she starred in two highly praised roles in the drama "Engelchen" ("Little Angel", 1996) that won her a nomination for the German film award, and in Michael Haneke's controversial and violent psychological drama "Funny Games" (1997). Since then, Lothar – besides continuing her theatre career – has again and again appeared in ambitious movie and TV productions like Eric Till's film "Bonhoeffer – die letzte Stufe" ("Bonhoeffer – Agent of Grace", 2000) alongside Ulrich Tukur, "Dreimal Leben" (2001) based on a play by Yasmina Reza, Ulrich Seidl's award-winning social study "Import/Export" (2007), or the tragicomedy "Fleisch ist mein Gemüse". She played another prominent role in Michael Haneke's internationally acclaimed and oscar-nominated drama "Das weiße Band" ("The White Ribbon", 2009).

Susanne Lothar was married to the actor Ulrich Mühe who died in July 2007. During the course of their careers, the married couple appeared in several films in front of the camera together, for instance, in "Funny Games", in Hans w. Geissendörfer's "Schneeland" ("Snowland", 2005), and for the last time in the psychological thriller "Nemesis" (2008), director Nicole Mosleh's debut film.