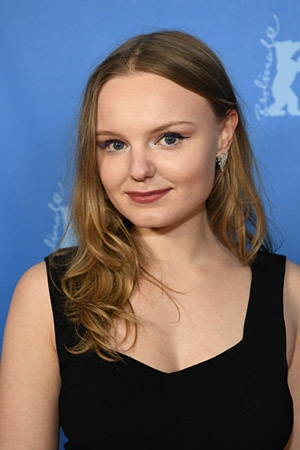 Maria-Victoria Dragus at the premiere of "Tiger Girl" at the IFF Berlin on February 10, 2017

Maria Victoria Dragus was born into a Romanian artist family in 1994. At he age of five, she already accompanied her father, a cellist, on stage. From grade five on, she studied ballet at the Palucca School in Dresden, where her mother, a professional dancer, also used to be student. Dragus first aimed at becoming a dancer herself, yet she early started acting alongside her school education and ballet training.

After embodying the sister of terrorist Gudrun Ensslin in Andres Veiel's "Wer wenn nicht wir" ("If Not Us, Who", 2011), Dragus was cast as the female lead in Emily Atef's "Töte mich" ("Kill Me"). In the film , she plays a teenage girl who wishes to die and therefore enters a morbid agreement with an escaped convict.

Following a supporting role in Stephan Wagner's award-winning TV drama "Der Fall Jakob von Metzler" (2012), Dragus starred in Friederike Jehn's "Draussen ist Sommer" ("Summer Outside"): For her impressive turn as a 14-year-old whose family tries to start over in rural Switzerland, Dragus won the Newcomer Award at the Filmkunstfest Schwerin.

In Bettina Blümner's award-winning "Scherbenpark" ("Broken Glass Park" 2012), she played the protagonist's troubled friend. In 2014, Dragus was among the ten annual "European Shooting Stars" honored by the European Film Promotion (EFP). The same year, she starred as a rebellious teen daughter in the TV comedy "16 über Nacht". Following her turns in the miniseries "Tannbach – Schicksal eines Dorfes" (2015) and Christian Schwochow's "Die Pfeiler der Macht" (2016, TV), Dragus had a supporting role in "24 Wochen", which premiered at the 2016 Berlin IFF. The same year, Cristian Mungiu's "Bacalaureat" (RO 2016) screened in the competition of Cannes IFF. The Romanian-language production featured her in the lead role of a doctor's daughter who desperately wants to study at an elite university in Britain.

Dragus next starred in the female buddy movie "Tiger Girl", which premiered at the 2017 Berlin IFF. The film, in which Dragus plays a reluctant young woman whose life is turned around after she befriends a street smart nonconformist (Ella Rumpf), was released in Germany in April 2017. The same year, she starred in the made-for-TV drama "Tod einer Kadettin" (2017), which dealt with the mysterious death of a female navy cadet.