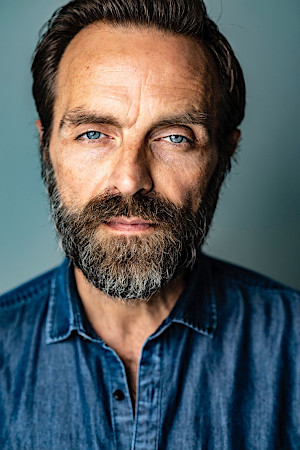 Aleksandar Jovanovic was born on 4 May 1971 in Rottweil. In 1991, he completed his education at the Stage School Hamburg with a focus on acting and dance; in the following years, he attended advanced acting workshops in New York, Toronto and Berlin. He appeared on stage in the Bochum productions of the musicals "Starlight Express" and "Grease", among others.

Jovanovic immediately attracted greater attention with his first screen role: in Fatih Akin's feature film debut "Kurz und schmerzlos" ("Short Sharp Shock", 1998) he had a leading role as a Hamburg Serb who wants to join the Albanian Mafia, thus setting off a chain of tragic events. His best friends - a Turk and a Greek – were played Mehmet Kurtulus and Adam Bousdoukos. "Kurz und schmerzlos" was awarded a special prize for the best acting ensemble at the Locarno International Film Festival (Switzerland). At the prestigious Grimme Prize, Fatih Akin and the three leading actors received the award in the category Fiction/Entertainment.

Since then Jovanovic has been appearing in numerous television productions, often in major and minor supporting roles. For example, he was a member of the ensemble of Volker Einrauch's "Gangster" (1999) with Frank Giering and Laura Tonke, and as a South Africa tourist he came into deadly danger in Peter Keglevic's thriller "Falling Rock" (AT 2001). Heinrich Breloer cast him in a supporting role as Germanist Harold von Hofe in an episode of the three-part docudrama "Die Manns - Ein Jahrhundertroman" ("The Manns - Novel of a Century", 2011). In the comedy "All' Arrabbiata – Eine kochende Leidenschaft" (2001), he played an Italian restaurant owner, and in the comedy "Italians and Other Sweets" (2004) he was the good friend and business partner of the title character.

Jovanovic played leading roles as a murder suspect in the "Die schlafende Schöne" (2005), an episode of the popular German crime series "Tatort", and as the kind-hearted doctor Dr. Livesey in the TV adaptation of "Die Schatzinsel" (2007). He also had other important TV roles as a mean pimp in Annette Ernst's social drama "Für meine Kinder tu' ich alles" (2009) and as the Serbian gang leader in the "Polizeiruf 110" episode "Feindbild" (2011). He has also been appearing in numerous series guest roles. In the six-part series "Der Knastarzt" (2014) he had a continuous role as the ice-cold prison top-dog.

In addition to acting, Jovanovic made several short films as director over the years. For the 24-minute "Mit Du" (2013) he won the award for best medium-length short film at the Kinofest Lünen.
From 2012 he was seen more often on the big screen again, first in very small roles: In Til Schweiger's action film "Schutzengel" ("The Guardians", 2012) he was a killer dressed as a policeman, in the family drama "Das Leben ist nichts für Feiglinge" ("Life Is Not for Cowards", 2012) he played a teacher. He had more significant parts as the Serbian main character's uncle in the award-winning coming-of-age love drama "Für Immer" (2014), and as the villain in the children's film "Winnetous Sohn" ("Winnetou's Son", 2015).

In 2016 Jovanovic was seen in two international cinema productions: In James Gray's multi-award-winning drama "The Lost City of Z" (US), based on historical events, he played the role of Urquhart, a Scotsman living in Bolivia and a companion of the famous ethnologist Percy Fawcett. In the action thriller "Collide" (DE/GB/US), he was an investigator of the main character, who is hunted by gangsters. In the same year he played a supporting role in the episode "The Return of Doctor Mysterio"  of the British science fiction series "Doctor Who".

Apart from this, Jovanovic's mainly continued working for German TV productions. Philipp Kadelbach's haunting thriller "Auf kurze Distanz" ("Point Blank", 2016), in which he played a Serbian sports betting mafioso, received much critical praise. Also in 2016 he took on the permanent role of a worldly-wise but inscrutable admirer of the chief investigator in the new series "Der Kroatien-Krimi". In addition, as a paranoid hacker he was part of the ensemble of the thriller series "You Are Wanted" (2017-2018).

Although Jovanovic is usually cast in shady or villainous parts, he occasionally gets to prove his comedic talent. For example, as the odd neighbour in the much-praised social comedy "Nur nicht aufregen!" (2016, TV).

In the feature film thriller "Steig. Nicht. Aus!" (2017) he had a leading role as a tough commissioner, in the comedy "Kalte Füße" ("Cold Feet", 2018) he once again played a crook. Jovanovic played a leading role alongside Katharina Schüttler in Sinan Akkus' TV comedy "Fast perfekt verliebt" (2019, TV). In the tragicomic British crime series "Wild Bill" (2019) he was a Russian gangster and opponent of Rob Lowe's title character.

He had an important role as boxing manager in the much acclaimed social drama "Gipsy Queen" (DE/AT 2019), which was theatrically released in 2020. Also in 2019 he was part of the ensemble of the American revenge drama "The Good Liar", where he played alongside Helen Mirren and Ian McKellen.

In March 2020 the streaming series "Spides" by Rainer Matsutani was launched. In the story about a creeping alien invasion, Jovanovic had a leading role as security chief of a power-hungry conspirator.