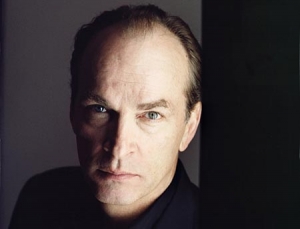 Herbert Knaup, born March 23, 1956, in the Bavarian city of Sonthofen, attended drama school at Munich's Otto-Falckenburg-Schule. He then became a cast member of Cologne's Schauspielhaus where he performed, for instance, in the part of Hitler in Tabori's production of "Mein Kampf". In 1978, Knaup made his movie debut in "Coda". He made his breakthrough performance in the thriller "Die Sieger" ("The Invincibles"), a part that also won him the Bavarian film prize as "best actor". Knaup is often seen in parts of torn characters, for instance as a corrupt police inspector in "Die Musterknaben" ("Cologne"s Finest", 1996), the main protagonist's freaking father in "Lola rennt" ("Run Lola Run", 1998), Goethe growing weary of the world in "Die Braut" ("The Mask of Desire", 1998), Albert Speer in "Nuremberg" (1999; Canada), Marlene Dietrich's husband in "Marlene" (2000), Professor Vester in the "Eva Blond" TV movies (from 2002 on), or the bourgeois Greens party politician in "Agnes und seine Brüder" ("Agnes and His Brothers", 2004).

He then starred in high-profile TV productions like "Augenzeugin" (2008), "Mogadischu" (2008) and "Eichmanns Ende" (2010). His memorable movie roles of that period include the archangel Michael in "Die Geschichte vom Brandner Kaspar" (2008), as well as parts in the controversial drama "This Is Love" (2009), the pulp novel adaptation "Jerry Cotton" (2010) and the comedy "Bon Appetit" (2010). In 2010, he starred opposite Benno Fürmann and Maria Schrader in the war drama "In Darkness". In 2011, he played a former manager now turned delivery man for frozen goods in the tragicomedy "Arschkalt" ("No More Mr. Ice Guy").

Subsequently, Knaup mainly worked in television: He played the uncle of singer Udo Jürgens in the TV biopic "Der Mann mit dem Fagott" (2011); a cantankerous bus driver in the comedy "Pilgerfahrt nach Padua" (2011) and a journalist in the drama "Komm, schöner Tod" (2012). For the bestseller adaptation "Milchgeld. Ein Kluftingerkrimi", he reprised his role as police detective Kluftinger – a character he already played in the 2009 production "Erntedank" and portrayed a third time in the 2013 TV film "Seegrund".

Knaup appeared in the theatrical releases "Schutzengel" ("Guardians", 2012) and "Drei Zimmer/Küche/Bad" (2012) before playing the role of watchmaker Zifferle in the children's book adaptation "Das kleine Gespenst" ("The Little Ghost"), which was released in the fall of 2013.

Apart from a supporting role on the big screen in the comedy "Irre sind männlich" (2014, director: Anno Saul) and a speaking role as narrator in the road movie "Die letzte Sau" ("The Last Pig", 2016, director: Aron Lehmann), Knaup only starred in TV productions over the next few years. His most important roles include a football official in "Landauer - Der Präsident" ("A Life for Football", DE/AT 2014, director: Hans Steinbichler), an opportunistic politician in the award-winning, politically relevant arms industry drama "Meister des Todes" (2015, director: Daniel Harrich) and the small-town father of a right-wing terrorist in Stephan Lacant's "Toter Winkel" (2017). For the latter role, Knaup was awarded the Günter Rohrbach Film Prize. In addition, for this role and for his portrayal of the powerful merchant Jakob Fugger in the historical drama "Die Puppenspieler" ("The Puppeteers", 2017), Knaup was nominated for the Bavarian Film Prize. Director Dominik Graf cast Knaup in his television play "Hanne" (2018) as the student love of the title character (Iris Berben).