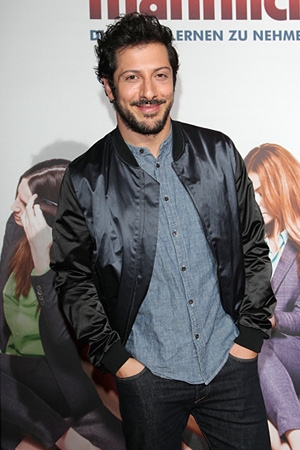 Fahri Ögün Yardim at the premiere of "Irre sind männlich" in Munich on April 10, 2014

Fahri Ogün Yardım was born in Hamburg in 1980. After completing his actor's training at the Hamburger Bühnenstudio, he performed at the "Hebbel am Ufer" and the Turkish-language theatre "Tiyatrom" – both located in Berlin – and the Ernst-Deutsch-Theater in Hamburg.

He made his feature film debut in the 2004 TV production "The Hamburg Cell". The same year, he also had a supporting role in Anno Saul's comedy "Kebab Connection". In 2005, Yardim starred in the TV comedy show "König von Kreuzberg", which was cancelled after one season due to low ratings.

Following more supporting roles, Yardim starred opposite Denis Moschitto in the award-winning gangster drama "Chiko". He went on to play German diplomat Michael Libal in the TV production "Mogadischu", a dramatized account of the 1977 terrorist hijacking of a Lufthansa airplane. In 2009, he also had memorable turns in the made-for-TV dramas "Schutzlos", "Tod aus der Tiefe" and "Engel sucht Liebe".

Yardim also had major roles in theatrical releases like "66/67 – Fairplay war gestern" (2009) and the award-winning family saga "Almanya – Willkommen in Deutschland" (2011). After a string of comedies – "Wer’s glaubt, wird selig" (2012), "Unter Frauen" (2012) and "Mann tut was Mann kann (2012) –, he appeared in the epic drama "Der Medicus" (2013). Since 2013, Yardim is also a regular cast member of the Austrian crime TV series "CopStories" and the sidekick of Til Schweiger's police detective in the Hamburg episodes of the popular TV series "Tatort".

In 2014, he starred in Anno Saul's comedy "Irre sind männlich" and reprised his role from "Mann tut was Mann kann" for the sequel "Da muss Mann durch". Following roles in the culture clash comedy "Marry Me & Family" and Til Schweiger's "Honig im Kopf" ("Head Full of Honey"), he was one of three leads in the 2015 release "Halbe Brüder" ("Half Brothers"). Moreover, he dubbed the animated character Rocket Racoon for the German release of the Hollywood blockbuster "Guardians of the Galaxy" (2014).

Again starring opposite Til Schweiger, Yardim reprised his role as police detective Yalcin Gümer for the 2016 "Tatort" entries "Der große Schmerz" und "Fegefeuer". The plot of the two TV movies was then continued in the theatrical release "Tschiller Off Duty".

Other big screen roles included a teacher in Alain Gsponer's dystopic Ödön from Horvath's film "Jugend ohne Gott" ("Godless Youth ", 2017), the male lead role in the intimate relationship drama "Whatever Happens" (2017) and an energetic hospital caretaker in the psychological thriller "Abgeschnitten" ("Cut Off ", 2018).

On TV, Yardim played himself in the comedy series "jerks" (2017-2019) alongside Christian Ulmen. He also played a leading role in the Netflix series "Dogs of Berlin" (2018) as a police officer investigating brutal Berlin clans. Lighter fare was his role in the children's film "Rocca verändert die Welt" (2019), in which Yardim played a homeless man who becomes the best friend of a perky girl, who lives alone.