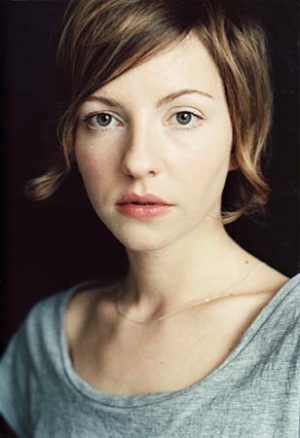 Katharina Schüttler, born October 20, 1979, in Cologne, worked as a child actor in movie and TV productions like "Die Lok" and several episodes of "Tatort" ("Crime Scene"). From 1999 on, she studied at Hochschule für Musik und Theater in Hanover. She appeared in films like "Die innere Sicherheit" ("The State I Am In", 2000) and "Das weiße Rauschen" ("The White Sound", 2001). Schüttler won the "Förderpreis Deutscher Film" for her first leading part in Michael Hofmann's "Sophiiie!" (2002) where she played a torn character like in many of her later roles.

Further important feature films were, for example, "Die Eisbombe" (2008) and "Ganz nah bei Dir" ("Close to You", 2009). In "Es kommt der Tag" ("The Day Will Come", 2009) by Susanne Schneider she plays the daughter of an ex-terrorist (Iris Berben), who confronts her mother after having been left alone by her as a child.

Besides her work in film and TV productions, Katharina Schüttler also is a successful theatre actress. She played leading parts in "Lolita" (2002) at Schauspiel Hannover or in Peter Kastenmüller's production of "Hedda Gabler" (2005) at Berliner Schaubühne. For the latter part she was awarded "Faust-Theaterpreis" and also "Actress of the Year" by the magazine "Theater heute".

2009 she played the lead in the mystery thriller "Die zwei Leben des Daniel Shore" ("The Two Lives of Daniel Shore"), and also had a minor supporting role in the screen adaptation of the bestseller "Lila, Lila". In 2010, Schüttler herself was cast as a terrorist: in Olivier Assayas' critically acclaimed three-part epic "Carlos – Der Schakal" ("Carlos the Jackal"), she played the terrorist Brigitte Kuhlmann. She then starred in the drama "Schurkenstück" (2010 TV), and played a leading role in the British mini series "The Promise" (2010), about a young woman, who tries to retrace her grandfather's history in Israel and Palestine.

Following appearances in the comedy "What a Man" (2011) and the action film "Schutzengel" ("Guardians", 2012), Schüttler played the girlfriend of Tom Schilling's character in the multi-award winning "Oh Boy" ("A Coffee in Berlin", 2012). In the acclaimed drama "Freier Fall" ("Free Fall", 2013), she portrayed the pregnant wife of a police officer (Hanno Koffler) who has an unexpected coming-out as a gay man.

Schüttler was one of the stars of the TV miniseries "Unsere Mütter, unsere Väter" ("Generation War", 2013), playing a singer who works in Nazi Germany and only slowly realizes the atrocities committed by the regime. Her performance and those of the other leads were honored with a special prize at the Bavarian Television Award. Following turns in the TV fantasy film "Vom Fischer und seiner Frau" (2013) and the British miniseries "Run", Schüttler returned to cinemas with a leading role in the satirical comedy "Zeit der Kannibalen" ("Age of Cannibals", 2014). For this performance, she as well as Sebastian Blomberg and Devid Striesow were awarded the Günter-Rohrbach-Filmpreis.

After a supporting role in in Jessica Hausner's period drama "Amour fou" (2014), she played a pregnant woman oblivious to her husband's financial problems in "Alles ist Liebe" (2014). In 2015, Schüttler had three memorable turns in a row: as the lover of Georg Elser, who attempted to assassinate Adolf Hitler, in "Elser" ("13 Minutes"); as the daughter-in-law and later wife of zoologist Bernhard Grzimek in the two-part TV movie "Grzimek", and as Miss Rottenmeier, the strict nanny in the successful screen adaptation of "Heidi".

After being one of the leads in the TV miniseries "Ku'damm 56" (2016), Schüttler played a struggling single mother in the acclaimed made-for TV romance "Seit du da bist" (2016, TV). Following roles in in "Rico, Oskar und der Diebstahlstein" ("The Pasta Detectives 3", 2016) and "Lou Andreas-Salomé" (2016), Schüttler joined the all-star ensemble of Dani Levy's "Die Welt der Wunderlichs" (2016), in which she plays an aspiring pop musician who is accompanied by her eccentric family to a casting show in Switzerland.