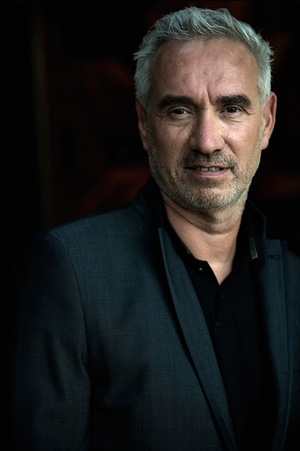 Roland Emmerich, born on November, 10, 1955 in Stuttgart, had already been artistically minded while still attending school: he illustrated books and exhibited his own paintings. In 1977 he took up his studies at the University of Television and Film in Munich. Initially focussing on production design, he soon changed to directing. He was the production designer of Doris Dörrie's graduation film "Der erste Walzer" ("Max & Sandy", 1978). His mid-length film "Franzman" (1979), which was intended as a filming exercise during his studies and which he shot on a shoestring budget with some old friends from school theatre days, was taken up into the program of the Hofer Filmtage. Emmerich's graduation film, the science fiction thriller "Das Arche Noah Prinzip" ("The Noah's Ark Principle", 1984) was the most expensive movie in the history of the University of Television and Film in Munich. In order to accomplish this film, he founded the production company Centropolis, which until this very day (co)produces all his movies. The visually spectacular film was invited to the Berlinale competition. Although it was criticized because of the dramaturgical gaps of its story, people nevertheless paid Emmerich due respect for widely ignoring the funding committees, from which he in the course of his further career became increasingly independent.

In the wake of  the two science fiction movies "Joey" ("Making Contact", 1984/85) and "Moon 44" (1988/89) some critics regarded Emmerich as the "German Steven Spielberg" and he followed the call to Hollywood where he directed the successful action movie "Universal Soldier" (1992), starring Jean-Claude van Damme and Dolph Lundgren. His ultimate breakthrough came two years later with the sci-fi fantasy adventure "Stargate" (1994). Emmerich's following movie about an alien invasion, "Independence Day" (1996), became an international box office hit, and firmly established Emmerich  in Hollywood as an expert for effects-laden blockbusters  – an image to which he remained true with his following films: the monster movie "Godzilla" (1998), the opulent period movie "The Patriot" (2000) starring Mel Gibson, the generally well-received disaster movie "The Day After Tomorrow" (2004), the stone-age epic "10,000 B.C." (2008) and  "2012" (2009), another highly successful doomsday spectacle.

At the same time Emmerich's appearance in Christoph Schlingensief's "Die 120 Tage von Bottrop" ("The 120 Days of Bottrop", 1997) shows that he is well capable of self irony. In 2005, he became president of the Jury of the Berlin International Film Festival. For the production of a socio-critical drama about human-trafficking, "Trade", Emmerich received the "Cinema for Peace Award" at the 2007 Hessian Film Award. In 2011 he returned to Europe for a new project, which again proved his versatility: the period drama "Anonymous" revolves around the question of the true authorship of the most famous works of William Shakespeare. The film went on to win six German Film Awards, including Best Camera (Anna Foerster), Best Editing (Peter R. Adam) and Best Costume Design (Lisy Christl). Christl's costume design was also honored with a nomination for an Academy Award.

For US television Emmerich made "Dark Horse" (2012), a crossover of fantasy drama and political thriller, then he shot the Hollywood production "White House Down" (2013) in which a cop and the president of the United States (Jamie Foxx) defend the Capitol against a terrorist attack. In Germany, Emmerich served as executive producer for Marco Kreuzpaintner's comedy "Coming In" (2014) and Oswald von Richthofen's "35 Cows and a Kalashnikov" (2014), a documentary on African masculinity rituals ranging from dandyism to voodoo wrestling.

A story much different from his typical action hits was in the center of Emmerich's next work as a helmer: "Stonewall" (2015) describes the self-discovery of a young man on the backdrop of the New York Stonewall riots from 1969, during which police clashed with homosexual protestors who fought against persecution and arrests. In interviews, Emmerich – who is openly gay – has pointed out that the film has been a matter close to his heart. "Stonewall" opened in German movie theaters in November 2015.