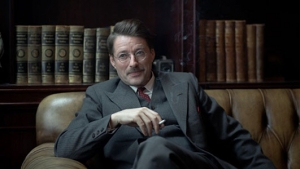 Bruno Eyron (birth name: Bruno Eierund) was born on 4 November 1964 in Lühnde. After completing school, military service and a study visit to the USA, he studied business administration in Munich from 1984. Soon, however, Eyron began to focus on acting. He attended the Vincent Chase acting school in Los Angeles and the HB Studios in New York City; he also attended several acting workshops in London.

After his first small appearances in front of the camera (e.g. as a hotel bellboy in Eckhart Schmidt's "Wie treu ist Nik", 1986), from the late 1980s on, Eyron regularly starred in television productions. He was also co-founder and director of the advertising agency Eierund, Gess und Partner in 1989, which specialized in fashion productions (until 1995). He had a small but important role as Prince Alfie von Auersperg in Barbet Schroeder's "Reversal of Fortune" (US/GB 1990), but then did not appear on the big screen for many years. Instead, he starred in a variety of series and television plays.

In the family series "Zwei Halbe sind noch lange kein Ganzes" (1993) he was the junior boss of Horst Janson’s main character; in the crime series "Anwalt Martin Berg - Im Auftrag der Gerechtigkeit" (1996-97) he played a recurring role as a private detective and he portrayed a computer specialist in the British-German science fiction series "Space Island One" (1998). In addition, Eyron had guest roles in numerous other series, such as "Kommissar Rex", "Um die 30" and "Schwurgericht". In the TV thriller "Klassenziel Mord" (1997) he played a leading role as a sports teacher, who is far less charming and harmless than he seems.

In 1998 Bruno Eyron got one of his most important and well-known roles: the title character in the successful crime series "Balko". Until 2006 he impersonated the unconventional Ruhrpott police inspector in 76 episodes. During this time Eyron only occasionally played other roles, for example a shady doctor in the kidnapping thriller "Kinderraub in Rio - Eine Mutter schlägt zurück" ("Kidnapped in Rio", 2000). In 2001, together with Marcus O. Rosenmüller and Werner Heinz, he founded the production company Casascania, which, however, hardly realized any projects.

Shortly before he left "Balko", Eyron took on another main role as police inspector in a TV series: from 2005 to 2006 he portrayed the investigator Christian Hennig (22 episodes) in "SOKO Donau". After that, he guest starred in several other TV series. Between 2014 and 2016 he had a recurring role as ex-husband of the female main character in the series "Ein Fall von Liebe" ("Partners in Justice"). He also appeared in several TV movies from 2013 on, mostly in supporting roles. For example in the romantic comedy "Ein Date fürs Leben" ("A Date for Life", 2009) and in the self-discovery story "Nach all den Jahren" (2013).

Eyron made his first appearance on the big screen in 13 years in a supporting role in the Turkish fantasy adventure film "Hititya Madalyonun Sirri" (2013). In the following year, he played the representative of an American cosmetics company in Marco Kreuzpaintner's comedy "Coming In", followed by a part in the Turkish children's adventure film "Mu Tiya Mu" ("The Mysterious Melody", 2015). He also had a minor role in the surreal sci-fi thriller "Snowflake" (2017).

Bruno Eyron got his first lead role in a feature film from director Florian Frerichs, after he had already starred in his short films "Phoenix" (2015) and "In the Ruins" (2016). In Frerich's feature film debut "Das letzte Mahl" ("The Last Supper", 2018) he impersonated a Jewish family man in Berlin in 1933, whose almost grown-up children react very differently to Hitler's rise to power.