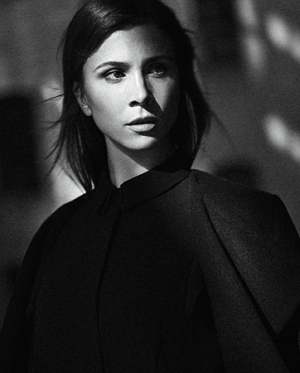 Aylin Tezel was born in Bünde in 1983. From 2004 until 2006, the daughter of a German mother and a Turkish father studied at the renowned Ernst Busch acting school in Berlin. Additionally, she was professionally trained in classical ballet and modern dance. Following first TV appearances, including a turn in Angelina Maccarone's controversial "Tatort" episode "Wem Ehre gebührt" (2007), she made her screen debut as an underage groupie who seduces a rock star in Andreas Morell's drama "Unschuld" (2008). After further TV work and a supporting role in "Bis aufs Blut – Brüder auf Bewährung", she got her first leading part in Ayse Polat's comedy "Luks Glück".

Her defintive breakthrough came with her starring role in the box office hit " Almanya – Willkommen in Deutschland". Director Yasemin Samdereli's film about the life of a Turkish family in Germany premiered in the competition of the 2011 Berlin IFF and went on to win the Silver Award at the 2011 German Film Awards. The same year, Tezel also starred in the fairy tale adaptation "Aschenputtel".

Since 2012, Tezel has a recurring role as police detective Nora Delay in the WDR edition of the popular "Tatort" TV series.

Her memorable performance in "Am Ende der Tag" won Tezel numerous awards, including the Deutsche Schauspielerpreis, which she was to win again for her portrayal of a young woman who has to cope with an unplanned pregnancy in the TV tragicomedy "Kleine Schiffe" (2013). Following a supporting role in Marco Kreuzpaintner's comedy "Coming In" (2014), she went on to guest-star in the US TV series "Homeland" and continued her stint as police detective Nora Delay in the Dortmund branch of the popular "Tatort" series. In the theatrical release "Macho Man" (2015), Aylin Tezel starred as a German-Turkish woman whose new German boyfriend tries to impress her by becoming a macho.

More serious fare was the TV thriller "Die Informantin" ("The Informant", 2016, directed by Philipp Leinemann) about a student (Tezel) who is under pressure from the judiciary to investigate undercover among drug dealers. Although the film received rather moderate reviews, Tezel's performance was usually highly praised (followed in 2019 by "Die Informantin - Der Fall Lissabon", directed by Isabel Kleefeld).

Tezel had smaller roles in the American war drama "Yellow Birds" (2017) and in the third season of the Canadian-Hungarian agent series "X Company" (2017). Director Joachim Masannek cast her as a key villain in the successful children's feature film "Liliane Susewind - ein tierisches Abenteuer" ("Little Miss Dolittle", DE/FR/BE 2018). The highly acclaimed TV thriller "Der Polizist und das Mädchen" ("One Man's Happiness", 2018) showed her as the wife of a policeman who uses every means to cover up his guilt in a tragic accident.

On the big screen Tezel 2019 was seen in the thriller "7500", as a flight attendant of a plane hijacked by terrorists. In addition, Aylin Tezel has been playing investigator Nora Dalay in the popular German crime series "Tatort".