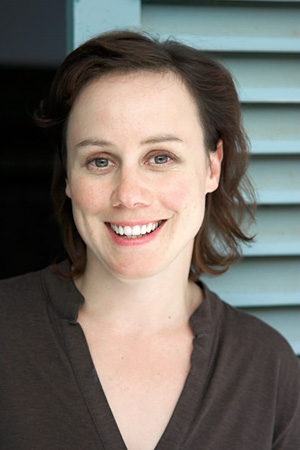 Eva Löbau, born April 26, 1972, studied at Max-Reinhardt-Seminar in Vienna in the department of acting and directing at Filmakademie in Ludwigsburg. Besides numerous theatre roles, Löbau started to appear in film productions from 1999 on.

In "Ich werde dich auf Händen tragen" ("I’ll Wait On You Hand and Foot"), directed by Iain Dilthey, she played a young single mother and won the award as best actress at the 2001 Festival International de Cine de Gijon, among other awards, for her performance. Löbau was also highly praised for her performance as a the stranded young teacher in Maren Ade's film "Der Wald vor lauter Bäumen" ("The Forest for the Trees", 2003).

During the following years, Löbau proved her versatility with a couple of highly different characters: She played a psychotic junkie in Detlev Buck's film "Knallhart" (Tough Enough", 2006), a vamp in Iain Dilthey's film "Gefangene" ("Prisoners", 2006), or a tourist who travels Asia on the search for meaning in "Hotel Very Welcome" (2007). Furthermore, Löbau made several TV appearances, for instance, in both of Angelina Maccarone's "Tatort" episodes, "Wem Ehre gebührt" (2007) and "Erntedank e.V." (2008), as well as in the TV comedy series "Hilfe! Hochzeit! – Die schlimmste Woche meines Lebens" (2007) alongside Christoph Maria Herbst.

After a small role in Quentin Tarantino's film "Inglourious Basterds", Eva Löbau played her next leading role on the movie screen in 2009 in Jovan Arsenic's ensemble film "Helden aus der Nachbarschaft" ("Heroes from the Neighbourhood").

After a supporting role in "Mein Leben im Off" (2009), she played the fiancé of the protagonist in the award-winning drama "Der Albaner ("The Albanian", 2010). Following her turns in "Im Alter von Ellen" ("At Ellen's Age", 2010) and the international thriller "Unknown Identity" (2011), Löbau appeared in a string of TV productions, including a part in the made-for-TV comedy "Blitzblank" and the female leading role in the acclaimed sitcom "Lerchenberg" (2013). She played the crucial role of Eva Wagner in the miniseries "Der Wagner-Clan. Eine Familiengeschichte" (2013) and displayed her knack for comedy in "Die Mütter-Mafia" (2014).

Following her roles in the 2014 releases "Coming In" and "Ein Geschenk der Götter", Löbau starred in the low-budget-comedy "Worst Case Scenario", which premiered at the 2014 Munich Film Festival, and was released in 2015. The same year, she had leading roles in the made-for-TV comedies "Der Kotsbrocken" and "Die Müttermafia-Patin", the latter being a sequel to "Die Mütter-Mafia".