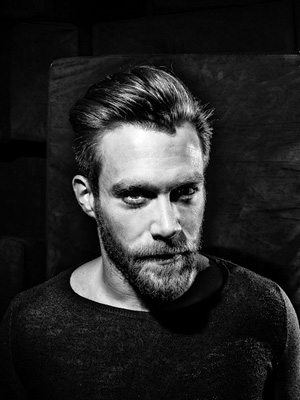 Ken Duken was born in Heidelberg on April 17th 1979. The son of an actors' family enrolled at the Internationale Theaterschule München, where he studied "Method Acting" and "Shakespeare Method". He performed in several plays, including "Der Besuch der alten Dame" and "Das Haus in Montevideo". Duken made his film debut in 1997 with the TV drama "Blutiger Ernst". His portrayal of a rebellious teen in "Schlaraffenland", his performance as a cop in Lars Becker's crime thriller "Rette Deine Haut" and his turn as a womaniser in "100 Pro" established him as one of the most promising young actors in Germany.

Duken also had a recurring role of a savvy police detective in Lars Becker's TV series "Nachtschicht". In 2005, he won the Grimme Award for Best Actor for his performance as an eccentric video nerd in "Kiss and Run". The same year, he played the male lead in Buket Alakus' acclaimed tragicomedy "Eine andere Liga". He gained further popularity in the 2006 miniseries "Störtebeker", in which he portrayed the titular hero, a famous German pirate. He was also prominently cast in international productions like the Italian made-for-TV epic "Karol. Ein Mann, der Pabst wurde" (2005), the French fantasy miniseries "Ali Baba und die 40 Räuber" (2007) and the Norwegian-Danish-German co-production "Max Manus" (2008).

In Thomas Sieben's "Distanz", which premiered at the 2009 Berlin IFF and was released in August 2010, Duken played the role of a young man who turns into a serial killer for no apparent reason. Also in 2009, he was seen in supporting roles in Quentin Tarantino's "Inglourious Basterds" and in Til Schweiger's "Zweiohrküken".

Following the memorable supporting role in "Zweiohrküken" (2009), Duken starred in Lars Becker's TV comedy "Schief gewickelt" (2010) and the US production "My Last Day Without You" ("Nie mehr ohne dich", 2011). He next played a German submarine captain in the German-British TV movie "Laconia" (2011), portrayed automobile pioneer Carl Benz in the TV production "Carl & Bertha" (2011) and a cardiologist fighting for the life of a little child in "Das Wunder von Kärnten", which won the 2013 International Emmy Award.

On the big screen, Duken appeared as a hotel manager in Uwe Janson's "On the Inside" (2012), and in the same year, he played a German naval officer in the WWI drama "Die Männer der Emden". Opposite Liv Ullmann and Juliane Köhler, Duken played the lawyer of a Norwegian woman who was abducted by the Nazis in WWII in the award-winning drama "Zwei Leben" (D/NO 2012).  He also had a memorable turn as a Jewish journalist in the TV miniseries "Das Adlon".

The 2013 Max Ophüls Preis festival saw the premiere of "Robin Hood", in which Duken plays a police detective on the trail of a ruthless investment banker. The same year, he starred in the TV production "Frei", portraying a Nazi officer who flees to Argentina after the end of WWII, but whose past eventually catches up with him. Following its premiere at the 2013 Filmfest Hamburg, Christian Alvart's thriller "Banklady" was released in the spring of 2014, with Duken playing a hard-nosed police detective. He again embodied a law enforcement officer, albeit a crooked one, in Urs Egger's made-for-TV "Der letzte Kronzeuge" (2014). Also in 2014, he had starring roles in "Dr. Gressmann zeigt Gefühle", the adventure epic "Northmen - A Viking Saga" and in the comedy "Coming In".

After a supporting role in the drama "Treppe aufwärts" (2015), Duken began production on his directorial debut "Berlin Falling", in which he also plays the male lead.

He played sports shoe manufacturer Adi Dassler in "Duell der Brüder – Die Geschichte von Adidas und Puma" (2016, TV) and a former boxer who is forced to fall in with the Mafia in the miniseries "Tempel" (2016, TV). Duken also had a recurring role as the father of young protagonist Conni in the theatrical releases Kinofilme "Conni & Co." (2016) and "Conni & Co. 2 - Das Geheimnis des T-Rex" (2017).

Duken's directorial debut "Berlin Falling" premiered at the 2017 Shanghai International Film Festival. Before the film was made available on the streaming and VoD platform Sky, which also served as co-producer, it had a special three-days-only theatrical release.