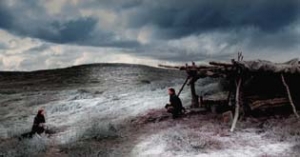 In Sweden′s barren hinterland, snow is everywhere, blurring the senses with its blinding whiteness. An illusion of purity, for it covers up pain and sorrow. Elisabeth, a writer who just lost her husband in an accident, has come here to take her life. But instead of finding her own death, she finds the snow-covered body of an old woman, Ina, and traces of a powerful passion that take us back to 1937...

After her mother′s death, Ina runs her family′s secluded farm alone with her father, Knövel, a bitter man whose worst enemy is life itself. Cruel and violent, he terrorizes his daughter, who is too loyal to leave him. Then Aron enters her life. A stranger with a dark secret. A man of few words, but with a heart. Their love turns into a passion that seems able to triumph over Ina′s misery and Aron′s restlessness. Yet Knövel relentlessly torments Ina, driving her to commit an act that can only be seen as a redemption. Ina is free – and Elisabeth finds the strength to go on with her own life in the passion that burned in this land of snow.