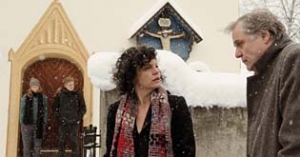 As if he could sense the coming crises, architect Georg Winter can only be persuaded by the urging of his wife Eva to undertake the journey to the funeral of his mother in the isolated mountain village where he was born. The two grown-up children, Reh and Jan, accompany their parents, unaware that they will be dragged into the mysterious past of their father. "Everything to do with suppression and denial ultimately becomes a question of power and powerlessness," says director Ina Weisse about her debut film. "The children in the family get to sense it directly."

In the village Georg runs into Hannah again, his former girlfriend, who lives there with her son. In confrontation with the past the seemingly harmonious façade of the family begins to crumble. Georg′s instinct is to run away, but the village is cut off from the outside world by an avalanche. "Now he could have the chance to come to terms with his past and acknowledge it, but he′s too much of a coward and isn′t able to, so in the end he′s guilty again," explains Ina Weisse.

Ina Weisse paints an impressive portrait of the drama of a family that is brought to the brink of ruin through repression, fear, guilt and self-deception.