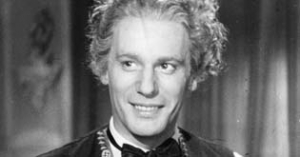 Gustaf Gründgens was born in Düsseldorf-Oberkassel on December 22nd 1899. After graduation, he became a WWI volunteer and was deployed to the Western front. During the war, he started acting in an army theatre troupe and later also became its director. After his discharge, he enrolled in the acting class of the Düsseldorfer Schauspielhaus and soon gave his professional stage debut.

Gründgens career in the theatre was equally diverse and impressive. Among his many engagements as an actor and director, the five years he spent at the Hamburger Kammerspiele between 1923-1928 were especially productive: He played 71 roles and directed 32 plays, covering the classics as well as operettas and modern drama.

In 1926, Gründgens married fellow actress Erika Mann, a descendent of the famous literary family. They divorced in 1929. Meanwhile, Gründgens continued to establish himself as a – if not the – key figure in Germany's theatre. His talents as a director were undisputed and his presence on stage was mesmerizing, most notably as the Mephisto in Goethe's "Faust". It was to become his "signature role", and he always returned to the part over the years. In 1934, Gründgens was appointed as a state actor and took over the Staatliche Schauspielhaus.

In 1936, he received the rank of a Prussian State Counsellor and married actress Marianne Hoppe. From 1937-1945, he was head of the Prussian State Theatre, where he focussed on the German classics and helmed a triumphant staging of "Faust I" and "Faust II" with himself as Mephisto. During the war, he worked for the army entertainment, and in the rank of a private, he was for some time stationed in the occupied Netherlands.

Gründgens' film career began in 1929, and early on he was pigeonholed into playing shady characters. In society comedies, he excelled as the distinguished, cold and cynical gentleman. He played seducers, playboys, schemers, blackmailers, making bonvivants and con artists his specialty. Consequently, his characters often combined perfect manners with criminal energy, as to be witnessed in "M" and "Liebelei".

At the end of the war, Gründgens was put under arrest by the Soviet authorities. But since many artists – among them famous communist activist Ernst Busch – testified for him, he was finally released in April 1946. Gründgens immediately returned to the stage, while his marriage to Marianne Hoppe ended.

From 1955 on, Gründgens was the general manager of the Deutsches Schauspielhaus in Hamburg, where he acquired a quasi-legendary status and his work received rave reviews. In 1963, he directed his last production with "Hamlet", and the same year, he retired from his position as general manager. While being on a world trip, Gustaf Gründgens passed away in Manila on October the 7th 1963.

The name of Gustaf Gründgens is inseperable from Klaus Mann's controversial and long-time banned novel "Mephisto". First published during the author's exile in Amsterdam in 1936, Mann's book is an only slightly disguised portrait of Gründgens, accusing the actor of being a spineless opportunist and unscrupulous Nazi supporter. In 1981, director István Szabó's adaptation of "Mephisto" was released, starring Klaus Maria Brandauer in the title role.