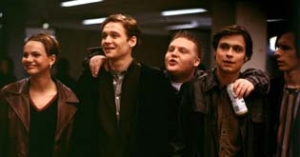 90/99 tells the story of a group of contemporary young people, growing up in well-to-do small-town comfort, in an environment of financial security and stability. Following the wild party of youth, they now stand hung over and aimless at life’s cross-road.

Felix is training to be a police officer but unsure whether he’s made the right choice. Maybe it would be better to return to the studies he had started but failed to finish. When he returns home, he realizes the carefree life of the past has vanished, never to be repeated. His friends have gone their own way, have their own problems to deal with, and compensate for the banality of their lives in quite different ways.

Soeren, training to become a property dealer, wants a life of comfort and quality. He supplements his income by smuggling drugs from Holland.

Schmidt is the macho of the group. Unable to express himself verbally and unsuccessful with women, he compensates with alcohol and occasional outbursts of violence.

Hausschild, friendly and easygoing, lacks goals and opinions. A colleague of Soeren’s, in his drug-befuddled spare time he hangs around with Schmidt.

And finally there is Simona, the youthful love of Felix’s life, but now together with Soeren. Also unsatisfied with her life, she once again leans towards Felix for the self-confirmation she needs.

It is only through the accidental death of a friend that the characters are shaken awake and able to return to their values. For Felix, it means he is finally able to make his way in a new but still uncertain future, away from where he grew up.

"We have had Generation X," says producer Bernd Krause, "and now we have Generation Planless; young people without a plan. Like American Graffiti defined this feeling for the rock’n’roll generation, we (myself and Petry) want to define it for today’s. The title itself refers to the decade and the year, the 1990s and 1999."

90/99 is the first feature to come from Krause and Petry’s jointly founded Modesto Film, the two having known each other since film school in Munich.

Overseeing the project for Bavaria Film is Uschi Reich, whose extensive credits include the hit children’s film, Emil and the Detectives (2000), and whose latest, Bibi Blocksberg, the classic tale of a young witch, is currently pulling in audiences of all ages.