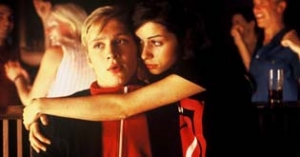 Solo Album
Ben, who works for the city′s most hip music magazine, is "the man" and he knows it … and takes advantage of it big time. People fawn all over him to get their music written up in his magazine and the girls adore him. But when he blows off his girlfriend Katharina′s birthday dinner in favor of a wild roll with a party girl, Katharina calls it quits. When it hits him that she′s really left him, Ben freaks. To get rid of his heartache he goes into denial and starts hanging out with other girls. He sees Katharina in a bar and tries to make her jealous, but instead makes a complete fool of himself.
She is sadly amused but Ben′s new girlfriend isn′t, and suddenly he′s back to playing his scratchy solo album. To top things off, Ben makes a stupid mistake and gets himself fired: ripping off an old Beatles review, he oversees one "John Lennon" in the text. Ben pulls ever more foolish stunts to get Katharina back, but she′s not buying it. Off to London for six months, she goes to Ben′s apartment to say goodbye. Hanging all over his apartment are pages of an epic love letter he has written to her…with no ending. Her hopes soar, perhaps the ending is what she′s been waiting to hear...