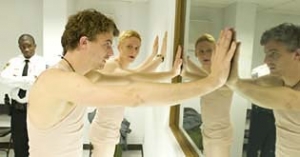 Germany in 1989: After the fall of the Berlin Wall, Germany goes into paroxysms of delight, and the whole city of Berlin is partying. GDR citizen Veit wants to make use of his newly gained freedom to realize his dream: to travel to San Francisco, to the westernmost point of the world. His friend Tom does not want to miss out on this adventure and thus decides to accompany him. But actually, there is another reason why Veit desperately wants to go to the United States. He wants to find his father who had emigrated to the USA when Veit was still a child. A batch of birthday cards stamped in San Francisco is Veit’s only hint for his father’s whereabouts. Unfortunately, Veit’s and Tom’s money only gets them to New York. Without money or contacts, and with only one word of English, "friendship", in their vocabulary, Veit and Tom still try to reach their final destination.