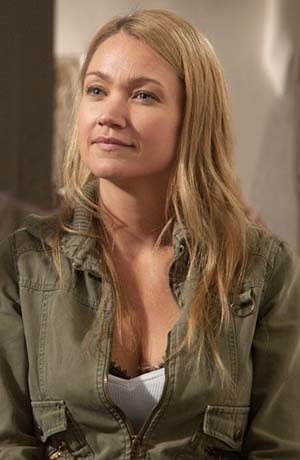 Lisa Maria Potthoff, born Juli 25, 1978, in Berlin, starts her career at the age of 17 by playing small supporting roles in TV-shows like "Marienhof" and "Flughafenklinik". In 1997 she enlists for a two year training at Münchner Schauspielhaus. Afterwards she appears in stage plays at Münchner Volkstheater and Theater Dortmund. She also plays supporting roles in numerous TV-shows like "Soko 5113", "Bei aller Liebe" (30 episodes) and "Polizeiruf 110" as well as TV-movies like Dominik Graf's highly praised drama "Bittere Unschuld" (1999). By playing the leading role in the TV-thriller "Die Tochter des Kommissars" (2001) she finally catches the attention from critics and audience alike.

In Rosenmüller's follow-up production "Wer's glaubt, wird selig" (2012), she plays the key role of Evi, a woman whose bossy, but recently deceased mother is intended to be canonized in order to attract pilgrim tourists to a struggling Bavarian ski resort.

The same year, she receives a nomination for Best Actress at the Bavarian Film Awards for her starring role in the drama "Tödlicher Rausch". She plays a villager who investigates the supposedly accidental death of her younger brother. Further prominent roles on TV are the C.I.D detective in the thriller "Blutadler" and the entrepreneur's wife with a criminal past in Lars Becker's "Trau niemals deiner Frau" (AT 2012).

Potthoff can be seen on the big screen in the Bavarian "Heimat" crime caper "Dampfnudelblues" (2013), based on the "Eberhofer" whodunit by Rita Falk, as the headstrong girlfriend of village cop Franz Eberhofer (Sebastian Bezzel). She also plays alongside Bezzel in the comedy "Die Gruberin" (2013) with both actors in similar roles.

Director Hannu Salonen casts Potthoff in a central role for his history thriller "Die Hebamme" (2014, TV) as a status-conscious midwife. Another feisty role for Potthoff follows in the comedy "Männerhort" where she features as the pregnant wife of an unnerved porta-potty salesman. In the crime caper "Winterkartoffelknödel" (2014), a sequel of "Dampfnudelblues", she returns as the girlfriend of provincial police officer Eberhofer.

"Mörderhus – Der Usedom-Krimi" (2014), the first part of a new crime series has Potthoff star as a chief inspector on the island of Usedom – a role she reprises in the sequels "Schandfleck - Der Usedom-Krimi" (2015) and "Ferienjob - Der Usedom-Krimi" (2016). She also sticks with the successful "Eberhofer" capers with Sebastian Bezzel: "Schweinskopf al dente", the third entry of the series, opens in German theaters in the summer of 2016, and in 2017, "Grießnockerlaffäre" marks part four. The feature film "Maria Mafiosi" (2017), with Potthoff as a clever Bavarian small-town policewoman, seemed like a version of the Eberhofer crime capers tailored to her.

After the rather moderate success of this film Lisa Maria Potthoff remained faithful to her well-tried roles in the following years: In the "Usedom-thrillers" she continued as chief inspector Julia Thiel, in the sequels of the popular "Eberhofer"-crime capers, "Sauerkrautkoma" (2018) and "Leberkäsjunkie" (2019) she impersonated the self-confident fiancée of the slightly awkward village cop Eberhofer. Furthermore, in 2018 Potthoff returned to the role of the eponymous chief inspector in the crime series "Sarah Korr" (the first part of which had been screened in 2014).