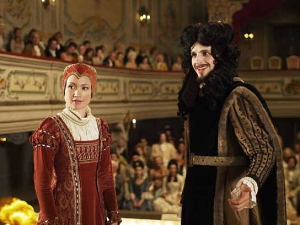 The year 1780. The theatre troupe of Emanuel Schikaneder and his wife and muse Eleonore are on the road to Salzburg, when lack of funding and permits forces them to set up camp in a mountain village near the Austrian boarder. In the village, an already long smouldering conflict is about to escalate: The impoverished miners are rebelling against their close-fisted boss Paccoli, who forces them to work under life-threatening conditions. Georg Vester, a new worker hailing from Allgäu, inspires his comrades with his courageous and astute conduct in the confrontation.
Meanwhile Schikaneder sees the dramatic potential of the upcoming revolt, and, in order to keep his ensemble occupied, promptly adapts the events into a new play. Yet the planned open air premiere causes new trouble, since Wolfgang Amadeus Mozart himself has announced his attendance.