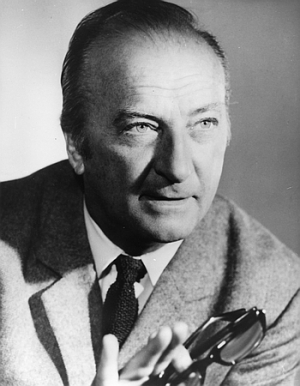 Kurt Bertrand Paul Hoffmann was born on November 12, 1910 in Freiburg im Breisgau and grew up in Berlin from 1916. He came in touch with the film business through his father, the cinematographer and film director Carl Hoffmann (1881-1947). In 1931 he volunteered as third assistant director to Erik Charell during the filming of the operetta "Der Kongreß tanzt" ("Congress Dances") and to Robert Siodmak for "Stürme der Leidenschaft" ("The Tempest"). After that he was involved as assistant director in nine films by Reinhold Schünzel until 1937, among them classics like "Viktor und Viktoria" ("Victor and Victoria", 1933) and "Amphitryon" (1935). The style of Schünzel's musical comedies was very formative for Hoffmann's own directorial work.

In 1937 Schünzel was classified as "half Jew" by the National Socialists and left Germany out of fear for his life. Hoffmann stayed in Germany and gained further experiences as an assistant to the directors Wolfgang Liebeneiner, Hans Steinhoff and Erich Engels. In 1938 he was an artistic consultant to Heinz Rühmann for his directing debut "Lauter Lügen" ("Many Lies"). In the same year he directed three short films for the production company Terra-Filmkunst to prove his talent as a director. It was Heinz Rühmann who then gave him the chance to direct a feature-length film in 1939: he hired him as director of the comedy "Paradies der Jungesellen", produced by Terra-Filmkunst, followed in the same year by the equally successful Rühmann comedy "Hurra, ich bin Papa!  ("Hurrah! I'm a Papa")

In 1939 Hoffmann married Betti Grimm, sister of the film director Hans Grimm and the still photographer Arthur Grimm as well as aunt of the child star Oliver Grimm. The marriage, which produced two children, lasted until Grimm's death in July 1989.

In 1940 Hoffmann was called up for military service and deployed in Poland and on the Western Front, but he was already temporarily exempted the following year. During this time he directed three films: the two Rühmann comedies "Quax, der Bruchpilot" (1941) and "Ich vertraue Dir meine Frau an" (1943), a remake of the farmer's tale "Kohlhiesels Töchter" ("Kohlhiesel's Daughters", 1943), and the marriage comedy "Ich werde Dich auf Händen tragen" ("I'll Carry You on My Hands", 1943). In 1944 he was drafted again and was in Belgium in American captivity until 1946.

After the liberation of Germany and his return from war captivity Hoffmann could only gradually gain a foothold in the film business again. Thus he initially worked as a dubbing director (among other things for Lubitsch's "The Shop Around the Corner") and in 1948 he directed his first post-war film with the drama "Das verlorene Gesicht" ("Secrets of a Soul"), based on the authentic case of schizophrenia of a young girl played by Marianne Hoppe.

He then directed the crime movies "Fünf unter Verdacht" ("City in the Fog", 1950) and "Der Fall Rabanser" (1950) and, more typical for Hoffmann, the musical comedy "Taxi-Kitty" (1950). The travesty fable "Fanfaren der Liebe" ("Fanfares of Love", 1951) showed the audience's favourites Georg Thomalla and Dieter Borsche as unemployed musicians who, disguised as women, joined a women's band - a daring  play with gender for that time. Seven years later, the film served Billy Wilder as the model for his classic "Some Like It Hot" with Tony Curtis and Jack Lemmon.

In 1952 Hoffmann cast Swiss actress Liselotte Pulver in the lead role of the comedy "Klettermaxe". With joint successes such as the romance "Ich denke oft an Piroschka" (1955) and the so-called Spessart trilogy "Das Wirtshaus im Spessart" ("The Spessart Inn", 1958), "Das Spukschloß im Spessart" ("The Haunted Castle", 1960) and "Herrliche Zeiten im Spessart" ("Glorious Times in the Spessart", 1967), he built her up into one of the greatest comedy stars of the 1950s and 60s.

Hoffmann also directed several adaptations of Erich Kästner novels in the 1950s: Especially "Das fliegende Klassenzimmer" ("Flying Classroom", 1954) and the comedy "Drei Männer im Schnee" ("Three Men in the Snow", 1955), for which Kästner personally wrote the scripts, were great successes with critics and at the box office. At the same time Hoffmann established himself more and more successfully as a director of sophisticated adaptations of literary works. His film adaptation of Thomas Mann's social satire "Bekenntnisse des Hochstaplers Felix Krull" ("Confessions of Felix Krull", 1957) was awarded the German Film Prize for Best Film and the Golden Globe for Best Foreign Film, among others. "Die Ehe des Herrn Mississippi" ("The Marriage of Mr. Mississippi", 1961) based on Friedrich Dürrenmatt's play was invited to the Berlinale competition.

The satire "Wir Wunderkinder" ("Aren't We Wonderful?", 1958) based on the novel by Hugo Hartung was awarded the Golden Globe and received a German Film Prize in silver. In this film Hoffmann traced German history between 1913 and 1955 by means of the contrasting lives of two former school friends, one a decent and politically disinterested, the other a cunning opportunist. Although the film was controversial among critics due to its strong emphasis on comedic-satirical elements, it was one of Kurt Hoffmann's greatest successes at the box office, both in the Federal Republic of Germany and internationally.

From September 1962 to December 1968 Hoffmann was a partner in the Independent Film GmbH of producer Heinz Angermeyer, which also (co-)produced all of his films until 1969. These included the Tucholsky adaptations "Schloß Gripsholm" ("The Gripsholm Castle", 1963) and "Rheinsberg" (1967). Kurt Hoffmann took on an unusually serious subject when he filmed M. Y. Ben-Gavriel's novel "Das Haus in der Karpfengasse" ("The House in Karp Lane", 1964). The ensemble drama is about the fate of Jewish residents of a Prague apartment building during the German occupation in 1939. Created in co-production with public broadcaster WDR, the film was shown on television in a longer, three-part version a few days before its release in the cinema. Although awarded the German Film Prize in Gold, the production proved a commercial failure. As a consequence Hoffmann turned again to the comedy subject.

With his regular actors Heinz Rühmann and Liselotte Pulver he shot the comedies "Dr. med. Hiob Prätorius" (1964) and "Hokuspokus oder: wie lasse ich meinen Mann verschwinden...?" ("Hocuspocus", 1966), a remake of his own film "Hokus Pokus" from 1953, at that time with Curt Goetz and Valérie von Martens in the leading roles. The family film "Morgens um sieben ist die Welt noch in Ordnung" ("In the Morning at Seven the World Is Still in Order", 1968) also proved to be a great success with over three million viewers. After the family comedy "Ein Tag ist schöner als der andere" ("One Day Is More Beautiful Than the Other", 1969), which was partly cast with amateur actors and on whose script Hoffmann also co-wrote, he shot his last feature film in 1971: the comedy "Der Käpitän" ("The Captain"), once again with Heinz Rühmann in the title role, also drew an audience of millions. However, another cinema project with Lilo Pulver remained unrealized.

He appeared as a director for the last time in 1976. For the public broadcaster ZDF he realised the episode movie "Sonntagsgeschichten" where he also appeared as a narrator in a short introduction. After that Hoffmann retired from directing for good. In 1979 he was awarded the Filmband in Gold at the German Film Awards for his "long and outstanding work in German film"; in the same year he was honoured with the Federal Cross of Merit 1st class. This was followed in 1995 by an honorary award at the Bavarian Film Prize and in 1996 by the Bavarian Order of Merit.

But despite such awards as well as numerous other film prizes and his box office successes, he has never received the same recognition from critics and film scholars as directors like Helmut Käutner and Wolfgang Staudte.

Kurt Hoffmann, married to Luise Schneider in second marriage since 1994, died on 25 June 2001 in St. Maria Ramersdorf in Munich, where he had last lived in a retirement home.