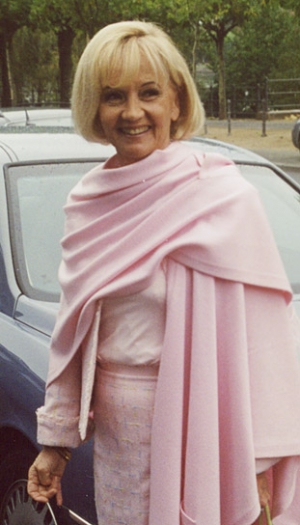 Liselotte Pulver at the opening of the exhibition "Ein guter Freund - Heinz Rühmann zum 100. Geburtstag", October 15, 2002 in the Deutsches Filmmuseum, Frankfurt am Main

From 1945 to 1948, Pulver attended a Töchterhandelsschule. After her graduation she started to work as a model. She then went to drama school at Bern"s Konservatorium and made her stage debut in Bern's Stadttheater. From 1949 to 1951, Pulver was a cast member of Zurich's Schauspielhaus. In the following years, she also did guest performances and toured with several plays. Pulver made her movie debut in 1949 in Leopold Lindtberg's "Swiss Tour" ("Four Days Leave"). In 1950, she starred alongside Hans Albers in the mountain drama "Föhn" ("White Hell") directed by Rolf Hansen. Then, in 1952, she for the first time worked with director Kurt Hoffmann and appeared in his comedy crime film "Klettermaxe".

Pulver then became known to a wider audience in Franz Schnyder's Gotthelf adaptations "Uli der Knecht" und "Uli der Pächter" ("Uli the Tenant"). In 1956, she won the Prix Femina in Ostende for her performances in "Der letzte Sommer" ("The Last Summer") and in the title role of a Puszta school girl in Hoffmann's comedy "Ich denke oft an Piroschka" ("I Often Think of Piroschka"). Pulver then rose to stardom and international fame as the merry and boyish girl of 1950s cinema. She starred alongside O.E. Hasse in Jacques Becker's Gaunerstück "Les aventures d’Arsène Lupin" ("The Adventures of Arsène Lupin"), as well as in the Remarque adaptation "A Time to Love and a Time to Die" by Douglas Sirk, and alongside Gérard Philipe in "Le joueur" ("The Gambler"), Claude Autant-Lara's adaptation of Dostoevky's novel.

Pulver also starred in German film productions, for instance as an carefree countess in Hoffmann's "Das Wirtshaus im Spessart" ("The Spessart Inn") which won the German fim award in 1958. Pulver also starred in the Thomas Mann adaptations "Bekenntnisse des Hochstaplers Felix Krull" ("Confessions of Felix Krull") and "Buddenbrooks" ("The Buddenbrooks"). From 1961 on, Pulver again appeared in international film productions and, for instance, proved her talent for slapstick in Billy Wilder's "One, Two, Three". Artistically, her performance as a lesbian abbess in Jacques Rivette's 1965 film "Suzanne Simonin, la Religieuse de Diderot" became the highlight of Pulver's career.

Besides her movie career, Pulver also appeared in several TV series and movies. From 1978 to 1985, she hosted the German version of the preschool show "Sesame Street" together with Henning Venske and Manfred Krug. In 1980, Pulver won the "Filmband in Gold" for her longtime achievements in German cinema. Furthermore , Pulver published her memories "… wenn man trotzdem lacht" in 1990.