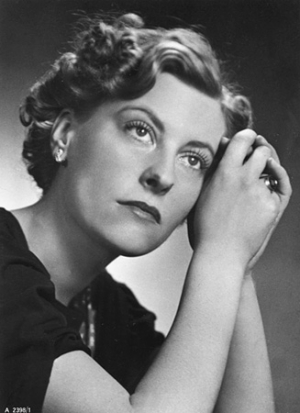 Marianne Stefanie Paula Henni Gertrud Hoppe was born April 26, 1909, in Rostock. The daughter of Karl Hoppe, the owner of a manor, and his wife Margarethe, born Kuchenmeister, grew up at Gut Felsenhagen in Mecklenburg and received private tuition. From 1924 to 1926, she attended Königin Luise-Stift in Berlin before she went to the commercial school for correspondence in Weimar where she came into intense contact with the theatre for the first time.

At the age of 17, she successfully applied for the drama school of Berlin"s Deutsches Theater and also took additional acting lessons from Lucie Höflich. On March 4, 1928, she made her stage debut as Lucie in "Mörder für uns" by Willi Schäferdieck at Bühne der Jugend at Deutsches Theater Berlin. Although she only had 15 lines in the first act, Herbert Ihering wrote about her performance: "Marianna Hoppe seems to be an acting talent with a great inner tone." (cited by Kohse, 2001).

From 1928 to 1930, Hoppe played several supporting roles at Deutsches Theater under Max Reinhardt, for instance, pages and maids. From 1930 to 1932, Hoppe performed at Neues Theater Frankfurt under director Arthur Hellmer, for instance, as Puck in Shakespeare"s "A Midsummernight"s Dream", as Franziska in Lessing"s "Minna von Barnhelm", and as Inken Peters in Hauptmann"s "Vor Sonnenuntergang", a role that she resumed five years later in the film version of the play, "Der Herrscher" ("The Ruler").

In 1932, she substituted Käthe Gold at Munich"s Kammerspiele unter Otto Falckenberg. In Molière"s "Die Kritik der Schule der Frauen" ("Critique of the School for Wives"), Hoppe played the role of Agnes alongside Karl Kyser (Adolph) und was praised by critics for "her funny girlish charme (as the major key counterpart to Käthe Gold"s minor key tone)" (cited by Kohse, 2001).

Hoppe made her movie debut in 1933 as Josefa in Franz Osten"s "Der Judas von Tirol" ("The Judas of Tyrol") based on Karl Schönherr"s historical play about Andreas Hofer. In 1935, Oskar Kalbus wrote: "Her noble and lucid face as maid Josefa mirrors the emotional turmoil and the enthusiastic commitment to the idea of the home country"s liberation." (Vom Werden deutscher Filmkunst. Der Tonfilm, 1935).

Hoppe immediately starred in leading roles, for instance, in the role of Hamburg-based Ursula who is drawn to "Heideschulmeister Uwe Karsten" ("The Country Schoolmaster") in the Lüneburg Heath, or in the title role of "Schwarzer Jäger Johanna" ("Black fighter Johanna"), a heroic epic from the time of the War of the Sixth Coalition. "Mariann Hoppe comes through with her own charme when she portrays restless, friendly girls, a rich and colorful charme – she does not stencil herself out, which is the main thing. We will readily keep this at times sad, but always boisterous and courageous Hannchen in mind." (Film-Kurier, September 20, 1934).

Hoppe starred in numerous films, many of them located in rural areas like Carl Froelich"s farmer comedies "Krach um Jolanthe" and "Wenn der Hahn kräht", or the adaption of Storm"s novel "Der Schimmelreiter" ("The Rider of the White Horse") – that saw Hoppe in the role of Else, the dike warden"s daughter, alongside Mathias Wieman (who played Hauke Haien) – but also in rather political films like Veit Harlans "Der Herrscher" (1936/37), a film that praised the Führer principle, thus contrasting strongly with Gerhart Hauptmann"s play "Vor Sonnenuntergang", the film"s literary source.

Hoppe then played leading roles in two films by Helmut Käutner: In "Auf Wiedersehen, Franziska!", she played the ordeal of an eternally waiting woman. Based on the literary source by Maupassant, Käutner finished the film "Romanze in Moll" ("Romance in a Minor Key") in 1942. The film depicts the rather personal problems of simple people with philosophical reflectiveness. Hoppe played the role of Madeleine – with Paul Dahlke in the role of her husband – with a lot of sensitivity and sentiment. "Madeleine moves through the film with a beautiful, mantling, and romanticizing calmness and surrenders to the hopelessness of her situation with noble grace. A humanly moving, artistically balanced performance: Without flowery phrases, lucid, experienced. Touching, because you can feel the actress"s emotion." (Film-Kurier, June 28, 1942).

From 1935 to 1945, Marianne Hoppe was a cast member of Staatliches Schauspielhaus at Gendarmenmarkt and married its artistic director Gustaf Gründgens in 1936. She made her debut in the role of Julia in "The Two Gentleman of Verona": "true Shakespeare, a boyish girl, tender, smooth, and grimly courageous." (cited by Kohse, 2001).

Hoppe also played the role of Katharina in "The Taming of the Shrew", the role of Viola in "Twelfth Night", Vivie in "Mrs. Warren"s Profession", the title roles in "Die Jungfrau von Orleans" ("The Maid of Orleans"), in "Minna von Barnhelm", and "Turandot", and the role of Isabella in "Measure for Measure".

Hoppe played leading roles in two of Gründgens’s films as a director: In "Capriolen", she played the pilot Mabel Atkinson who lives in a turbulent marriage with the star reporter Jack Warren. In "Der Schritt vom Wege", the adaptation of Fontane’s novel, she convincingly portrayed Effi Briest’s process of maturation and emancipation. "At the time, a film that dared to show its disgust with the zeitgeist was a courageous film. The national dramatic advisors had demanded to purge the character of Effi as an adulteress, and to present Innstetten, the cowardly husband, as Prussian hero and as a role model for male upbringing. But Gründgens chose the realistic model, and Marianne Hoppe was able to convey without many words, but with facial expressions and gestures that the husband was endearing and good-natured but neither a lover nor a hero." (Koberg, 2002).

In 1946, Hoppe and Gründgens divorced. Pregnant with her son Benedikt Johann Percy – from an affair with her longtime friend, the british journalist Ralph Izzard – Hoppe left Berlin and moved to Siegsdorf, Upper Bavaria.

After the war, Hoppe more and more developed into an actress for psychologically complex characters. She mastered the subtlest gestures and nuances of language und played either vulnerable and decadent but also vital and humorous characters. In 1948, she made her best performance of the post-war era in the role of a schizophrenic in "Das verlorene Gesicht" ("Secrets of a Soul"), directed by Kurt Hoffmann.

From 1947 to 1955, Hoppe was a cast member of Schauspielhaus Düsseldorf, thus artistically associated with Gründgens again, and played, for instance, Elektra in Sartre"s "Die Fliegen" ("The Flies"), Leonore von Este in "Torquato Tasso", and Celia Coplestone in Eliot"s "The Cocktail Party". She made guest performances in Berlin, Munich, Vienna, Hamburg, and at the Salzburg Festival, and played, for instance, the title role in "Maria Stuart" (1951), the role of Orsina in "Emilia Galotti", and finally the old lady in Marguerite Duras" "Savannah Bay" as well as the role of the mother in Tankred Dorst"s play "Auf dem Chimborazo".

From the 1960s on, Hoppe more and more appeared in TV productions. She starred, for instance, in three episodes of the TV crime series "Der Kommissar". In the episode "Claire" of the TV series "Kir Royal", starring Franz Xaver Kroetz, she convincingly portrayed a formerly successful, now aged actress. In 1975, Wim Wenders gave her the role of Frau Meister in "Falsche Bewegung" ("False Movement"). The film"s screenplay was written by Peter Handke and was based on Goethe"s novel "Wilhelm Meisters Lehrjahre" (Wilhelm Meister"s Apprenticeship").

In the low-key TV movie "Tod des Vaters", a two person play with Hoppe in the role of the mother, gave Hoppe once more the opportunity to demonstrate her unchanged expressiveness.

The production of Thomas Bernhard"s "Die Jagdgesellschaft" at Berlin"s Schillertheater – in the play, Hoppe played the wife of a former Wehrmacht general (played by Bernhard Minetti) – in 1974 was the starting point of a friendship between the Austrian actor and the actress. Bernhard wrote "Am Ziel", the monologue of a casting house proprietress, with Hoppe in mind. With this performance Hoppe started the last part of her great stage career.

In 1990, Hoppe played the title role of "King Lear" in Robert Wilson"s production at Städtische Bühnen Frankfurt. "With a sharp voice and haughty gestures: a tough old lady. Her wisdom is vicious. (...) Every inch anti-sentimental. A noble, cold machine. " (G. Stadelmaier, Frankfurter Allgemeine Zeitung, May 28, 1990).

Already at old age, she appeared in Heiner Müller"s plays "Quartett" and "Der Auftrag" at Berliner Ensemble from 1993 to 1996. In his documentary film "Die Königin", Werner Schroeter gave an authentic portray of the grand old lady of the German theatre and film.

In 1965, Hoppe became a member of Akademie der Künste in West Berlin. The academy"s department of performing arts appointed her with the Hermine Körner ring for life as only the second bearer after Roma Bahn.

On October 23, 2002, Marianne Hoppe died in a retirement home near Siegsdorf, Upper Bavaria.