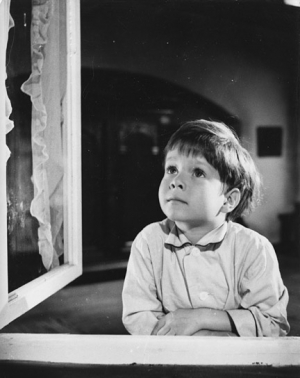 Oliver Grimm was born on 3 April 1948 in Munich. His parents were the Ufa actress Hansi Wendler (1912-2010) and the film and dubbing director Hans Grimm (1905-1998). Oliver Grimm had his first small film appearance at the age of four in a short scene of the family story "Ich heiße Niki" (1952). Shortly afterwards he was seen in the cheerful family film "Vater braucht eine Frau" (1952) as the youngest child of a widower and father of four (Dieter Borsche). The film was directed by Harald Braun, who, like Grimm's father, worked for the Munich production company NDF.

This was followed by the leading role in the "Heidi" variation "Frühlingslied" (1954) as well as supporting roles in the aviation drama "Morgengrauen" (1954, again with Elisabeth Müller) and the artistic drama "Griff nach den Sternen" ("Reaching for the Stars", 1955). Grimm was able to celebrate his greatest success under the direction of his father: In "Wenn der Vater mit dem Sohne" he played the foster child of a former music clown (Heinz Rühmann), who takes the boy so deeply into his heart that he flees with hm when his biological mother demands him back. The enormously successful film made Grimm a celebrated child star.

In Robert Siodmak's drama "Mein Vater, der Schauspieler" (1956) he was the son of a star actor falling into depression; in Hans Grimm's "Kleiner Mann - ganz groß" ("Little Man on Top", 1957) he had the leading role of an orphan boy fighting for his beloved foal. Robert A. Stemmle cast him in the comedy "Majestät auf Abwegen" (1958) as a closely guarded child star who, together with a king of the same age and a young bellboy, wants to break out of the constraints imposed on him.

Grimm had a leading role as a shrewd son in Kurt Hoffmann's romantic comedy "Das schöne Abenteuer" ("Beautiful Adventure", 1959) with Liselotte Pulver and Robert Graf. Under the direction of his father Grimm  appeared in the comedies "Schick deine Frau nicht nach Italien" (1960, as son of Harald Juhnke) and "Isola Bella" (1962, as boy scout).

In Georg Tressler's Beethoven film biography "The Magnificent Rebel" (US 1962), produced for the Walt Disney Studios, Grimm played a leading role as a blind boy. However, the film did not go down well with the critics or the audience. The award-winning war drama "Reach for Glory" (1962) was made as a British production, with Grimm as a Jewish refugee boy who becomes the target of a brutal boy clique in a small English town. However, Grimm did not succeed in making the transition from cute child star to youthful character actor. The film received good reviews and several awards but wasn't a box-office success - in Germany it did not have a theatrical release at all.

After a last role under the direction of his father in the hit film "Lieder klingen am Lago Maggiore" (DE/CH 1962), the now 14-year-old Oliver Grimm retired from acting. He graduated from high school and studied structural engineering for three semesters, but then returned to the acting profession after all. He took acting lessons with Marlise Ludwig in Berlin but wasn't able to establish himself in the film and television business. Only in 1975 he had a guest appearance in an episode of the crime series "Derrick". Instead he acted a lot of theater and got engagements at the Intimate Theater as well as at the Theater Die kleine Freiheit in Munich and at the Hebbel Theater in Berlin; he also had guest performances in Frankfurt, Basel and Zurich. He appeared on stage in "Blick zurück im Zorn" ("Look Back in Anger"), "Biedermann und die Brandstifter" and "Wilhelm Tell", among others.

As a dubbing actor, Grimm lent his voice to the title character in the German language version of the manga animated series "Kimba, the White Lion" (German premiere: 1977) and Steve Buscemi in the mafia film "Miller's Crossing" (US 1990), among others. He also taught dubbing to drama students.

In 1997 Grimm took part in Dominik Graf's and Michael Althen's "Das Wispern im Berg der Dinge" ("A Whispering in the Mountain of Things"), an essayistic documentary about the actor Robert Graf (Dominik Graf's father). His only feature film appearance since 1962 was as a teacher in Marco Petry's teenage comedy "Schule" (2000).

On October 10, 2017 Oliver Grimm died in Passau from cancer.