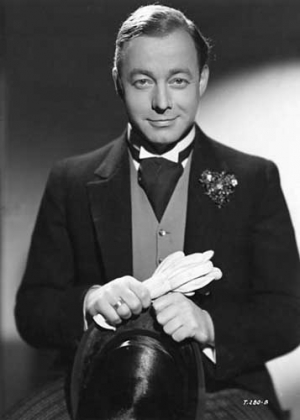 Heinz Rühmann grew up in Wanne-Eickel and Munich and finished elementary school in 1913 in Lennep. From 1916 on he went to secondary school in Munich but did not take his final exam and attended actor's training instead. In 1920, Rühmann worked for Lobe and Thalia Theater in Breslau, from 1921 to 1925 at theatres Hanover, Bremen and Munich. Then, from 1927 to 1935, he worked for Deutsches Theater Berlin and Munich's Kammerspiele alternately.

Rühmann's first movie was "Das deutsche Mutterherz" in 1926 where he played a mean son who beats his mother. In 1930, he starred in Wilhelm Thiele's successful sound film operetta "Die Drei von der Tankstelle" (Three From The Filling Station). In the following years, he became one of the busiest comedians of German cinema. He predominantly played roguish, street-smart characters who get on in their life by small cheatings and cheekiness but meet their fate and all contradictions surrounding it with indifference. Rühmann also starred as a reserved but smart partner of Hans Albers in "Bomben auf Monte Carlo" (Bombs Over Monte Carlo, 1931) and in "Der Mann, der Sherlock Holmes war" (The Man Who Was Sherlock Holmes, 1937).

In 1938, Rühmann directed his first movie "Lauter Lügen" (Many Lies) with Hertha Feiler who became his second wife in 1939in the leading role. Also from 1938 on, he produced his own films as well as films by other directors with the production company Terra. Among those films were Kurt Hoffmann's first movies by like "Quax, der Bruchpilot". From 1938 to 1943 Rühmann played at the Preussische Staatstheater in Berlin and was awarded National Actor in 1940.

After World War II, Rühmann toured the part of Germany occupied by the Soviets with his own production of "Der Mustergatte" (Model Husband) and staged the play in Munich and Berlin in 1947. In that year, he also founded the production company Comedia together with Alf Teich but went bankrupt in 1952. Subsequently, his roles became more and more tragicomic. Rühmann stayed successful as a stage as well as movie actor with serious parts as a father figure and in strong character roles. He won the Bundesfilmpreis for "Der Hauptmann von Köpenick" (The Captain of Koepenick) by Helmut Käutner und "Das schwarze Schaf" (The Black Sheep) by Helmut Ashley; furthermore for "Menschen im Hotel" (Grand Hotel) by Gottfried Reinhardt und "Der brave Soldat Schwejk" (The Good Soldier Schweik ) by Axel von Ambesser.

From 1968 on, Rühmann mainly worked for TV productions and was awarded in New York for his performance in Rolf von Sydow's TV movie "Ein Zug nach Manhattan" in 1981. During the 1980s, Rühmann mainly appeared on TV in quiz shows, Christmas shows or galas. In 1972 he won the Filmband in Gold for his long-time outstanding achievements in German cinema. During his long career, Rühmann won a large number of awards and was awarded many official decorations. He also published several books: "Heinz Rühmann erzählt vom Geschenk der Weisen und andren Begebenheiten" in 1978, his memories "Das war's" in 1982 and the photo biography "Ein Leben in Bildern" in 1987.