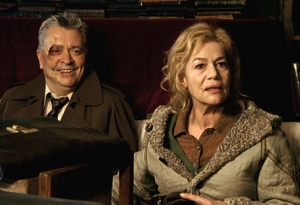 Go For Zucker – An Unorthodox Comedy

"I'm in deep shit," muses Jaeckie Zucker about the current state of his life, "but at least the view′s good." Actually, Jaeckie was born as Jakob Zuckermann in 1947, but since 1961 he wants nothing to do with the Jewish "club".That was when his mother fled to the West with her first-born son Samuel as the Wall was built, leaving Jaeckie to fend for himself. He became a celebrity sports reporter, but has been down on his luck since the fall of the Wall. He barely makes ends meet by playing billiards and gambling. Jaeckie owes the bank a huge sum of money, which the branch manager – his son Thomas – is trying to collect, and his wife wants a divorce. His only hope is to win the 100,000 euro jackpot at the European Pool Tournament, but just before it starts his mother dies. Her will provides that her two sons will only inherit her fortune if they reconcile their differences and stay indoors during shivah, the seven-day period of mourning – just when the tournament is taking place.

For Woody Allen, Roberto Benigni or Mel Brooks it's the most natural thing in the world, but till now in Germany almost unthinkable: an audacious, politically incorrect, self-ironical Jewish comedy. With this unorthodox family tale of two brothers separated by the Wall, politics and belief, Dani Levy has succeeded in painting a deeply human, sympathetic picture of Jewry in present-day Germany.