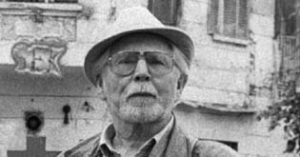 Fred Delmare was born as Werner Vorndran in Hüttensteinach, Thuringia on April 24 1922. The son of a carpenter and a seamstress completed an apprenticeship as a metalworker  between 1937 and 1940, and then enlisted in the navy in Bremerhaven, where he also started taking acting classes and began working as an extra in stage productions. In 1943 he was severely wounded in combat, and till the end of the war, he stayed in several military hospitals. In 1946, he continued to study acting at the Weimar national theatre and took on the stage name Fred Delmare. From 1947 to 1950, he was a student at Hebbel drama school in West-Berlin and took private lessons from Karl Meixner, for whom he also worked as an assistant. In 1948, Delmare was diagnosed with an eye defect, which would continue to affect his career in future years.

During the year 1949, he and stage partner Leny Marenbach toured with a programme of recitations and musical numbers. In 1950, he joined the ensemble of the Schauspielhaus in Leipzig, where he was a mainstay until 1970.  Though Fred Demare was of short height and therefore was seldom cast as the hero, he excelled in countless supporting roles, and his vivid characterizations gained him a lot of prominence. Also, his dramatic range was impressive.

He played the alleged arsonist Marinus van der Lubbe in the drama "Der Teufelskreis", and reprised the role of the ordinary man, who was sacrificed by the Nazis, in the 1956 screen adaptation. In both the 1960 TV production and Frank Beyer's now-classic 1963 cinema release of "Nackt unter Wölfen", Delmare played the scared concentration camp prisoner Pippig, who overcomes his fears and helps rescuing a child.

Between 1970 and 1992, Delmare was regularly cast in productions of East-German broadcaster Deutscher Fernsehfunk, and also one of the most prolific actors of the DEFA. In regard to his roles, he displayed great versatility and range, and among his most memorable performances number his turns in "Die Legende von Paul und Paula", "Januskopf" and "Beethoven – Tage meines Lebens". Delmare also appeared frequently in DEFA's highly popular fairy tale and western productions, including "Schneewittchen", "Das blaue Licht", "Spur des Falken" and "Ulzana".

From 1990 on, Fred Delmare predominately worked in television, and guest-starred in popular programmes like "Sylter Geschichten" and "Lindenstraße". In the TV production "Matulla und Busch", directed by Matti Geschonneck, Delmare starred opposite Erwin Geschonneck's stubborn Matulla as the clever Busch. Between 1999 and 2005, he played the recurring role of the grandfather Friedrich Steinbach in the popular series "In aller Freundschaft".

Fred Demare was married five times. After suffering from  a severe case of pneumonia, he passed away on the 1st of May 2009 in a Leipzig hospital.