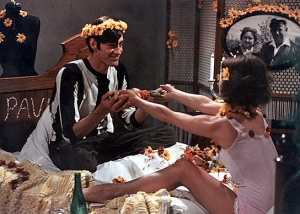 The Legend of Paul and Paula

Paul and Paula have known each other for a long time, but it is only in a roundabout way that they eventually become lovers. There are reasons for this, of course: Paul is married albeit unhappily. Paula is also tied, though not to a husband, but she has a steady partner and two children, besides. Saft, the tyre dealer, sets out to win round the young single woman. Being rational and thinking of what is best for the children, Paula is not really opposed to marrying this extremely decent and respectable, though much older, man.
Paula and Paul meet each other in a bar by accident. They fall in love, and this feeling very soon develops into a profound emotion.

Yet, Paul, who can never make up his mind, almost gambles away his luck. Paula feels betrayed by him. And when her child dies in an accident, she blames herself for it and splits up with Paul. Only now does he realize how much he loves Paula. He starts to fight for her. This is so moving that all who witness it will deeply sympathize with Paul. Finally, Paul wins over his Paula despite all the obstacles. Their love becomes legendary in Paul and Paula′s neighborhood, especially because Paula dies at the birth of their child.