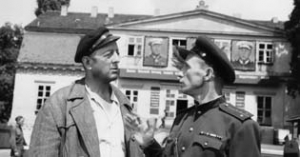 In summer 1945, Karl Bluecher, a worker known as Kalle, sets out from Dresden for Wittenberge to try and procure carbide, which is desperately needed to restart production in a destroyed factory.

It is not by chance that Kalle is the one to go: on the one hand, his brother-in-law works at the carbide plant in Wittenberge; on the other, Kalle is a vegetarian and so would definitely manage to get there without any food problems. He does get through to Wittenberge and could return to Dresden with seven drums of carbide, if only he had the required means of transport ... His return journey is quite an adventure. Kalle gets to know Karla, a young peasant woman, and they fall in love, yet he does not stay with her because his colleagues in Dresden are urgently waiting for the carbide. At one stage, Kalle is arrested by Soviet officers for alleged profiteering, and then released again. He foils US officers and manages to cover quite a stretch home in a military motorboat. He escapes a man-crazy widow, a mined forest, a shipwreck and many other calamities. Meanwhile, he takes up all sorts of odd jobs. Eventually, he goes back to Dresden with only two drums of carbide. Still, that will do for a new beginning. However, there is no keeping Kalle at work with his colleagues: he heads back to Karla.