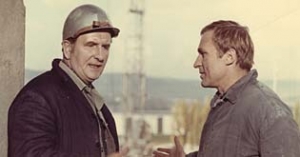 Brigadier Helmut Kamp is in his mid-forties and believes that he has got his life under control. He owns a house in Thuringia, has a loving wife and two adult daughters, and is regarded as an experienced foundation builder who is treated with respect in his workplace. But then things change at one go: His wife Elfriede tells him that she is pregnant for the third time. At the same time, Kamp has to go to the Baltic Sea where a nuclear power plant is about to be built. Then, shortly after giving birth to her third child, Elfriede dies in a car accident, and his daughter Ingrid moves in with him together with the newborn and her own little child because she broke up with her friend. But all this is too much for Kamp, who becomes depressive. But then he meets a female Soviet engineer at the construction site – and Ingrid also finds a new love there. Eventually, Kamp gets over his depressions and takes on a responsible position as a party secretary.