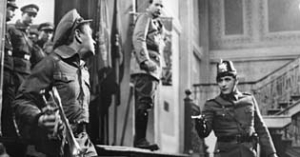 Fritz Weineck, a worker′s son from Halle, loves music – and dreams to make a living out of it one day. When his friend Alfons, a World War I veteran, gives him a trumpet as a gift, Fritz seems to come closer to fulfil his dream. But then, Fritz realizes that after the end of the German empire workers still have to desperately fight for their rights, and decides to use his instrument for political means: At a meeting of militant workers, he uses his trumpet as a signal horn. But Fritz suffers a severe setback when a comrade dies in the fight for an arms depot because of his fault. On March 13, 1925, he becomes a hero when he warns comrade Thälmann at a speech in Halle with his trumpet signal and saves him from the advancing police – Fritz himself dies during the event.