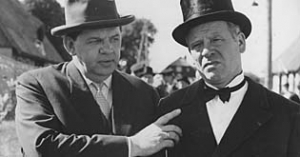 Länneken, a little island on Lake Constance, is a place where time seemingly stands still. Traditional customs and age-old power relations are still in place and are unaffected by modern-day influences. Not even the foundation of a fishery cooperative has diminished the power of the two richest fishermen, Pröpping and Grabe. Both men have been bitter rivals for ages. Nevertheless, Grabe′s son Henning and Pröpping′s daughter Bärbel prepare to break with the traditions that restrict their lives, as they are had over heels in love with each other and want to marry. When Henning′s father learns about his son′s plans, he throws him out of the house. Old Pröpping puts the young man up because he expects to get access to the best fishing grounds by Henning′s and Bärbel′s marriage. But when he learns that Bärbel and Henning want to strengthen the cooperative and to give every fisherman a fair share of the fishing grounds, he disinherits his daughter. Yet, neither Grabe nor selfish Pröpping can stop the marriage of their children. Furthermore, the old men will not be able to defy economic equity and progress much longer.