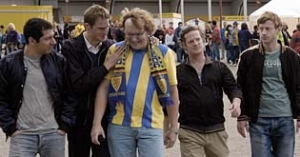 
For six young men, who could hardly be more different from one another,
the fan club of the Eintracht Braunschweig football club is the centre of
their life and their friendship. 66/67 is the name of their club as well as the
year in which Eintracht Braunschweig won the German Championship.
With their 66/67 branding Florian, Otto, Henning, Christian, Tamer and
Mischa have not only heroically vowed to stand up for each other, but also,
after the final whistle is blown, they celebrate together the kick of violence
in the “third half”. There they delve into the fray with a ruthlessness that has
no regard for pain.

However, behind their existence as fans lies the deeper
desire to find a fixed point in their lives that is sacrosanct: their friendship.
But gradually the pals discover that their individual difficulties can no
longer be solved within the group. Each of the protagonists has his own
problems, which are based outside of the football stadium. The friends are
forced to discover that it isn’t their club that is facing the greatest challenges,
but rather they themselves.

With "66/67 – Fairplay is over" the director duo Ludwig & Glaser present
their third feature film collaboration. Jan-Christoph Glaser: "After ′Detroit′
[…] we were itching to make an ensemble film and to delve into the world
of football." Self-professing Eintracht Braunschweig fan Carsten Ludwig
adds: "Today hooliganism for me is a grotesque and anachronistic version
of the temporary rebellion against conformity and mediocrity."