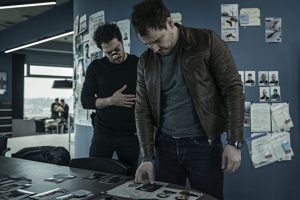 Netflix is working with the thriller specialist Christian Alvart as writerdirector and showrunner on its second German original series "Dogs of Berlin" which continues shooting at locations throughout the German capital until May 2018. Centering around the murder of a German-Turkish national football player on the night before a major international game in Berlin, the 10-part series sees Felix Kramer and Fahri Yardim as two unconventional cops – an officer from East Berlin and his German-Turkish colleague – taking up the fight against crime in Berlin’s underworld and following various leads, among others, into the Neo-Nazi scene and the local mafia as well as up to the highest level in the capital’s political establishment.