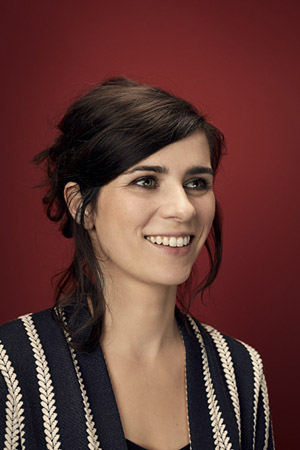 Nora Tschirner, born on June 12th, 1981 in East Berlin, is the daughter of documentary filmmaker Joachim Tschirner. She played her first parts in Connie Walther's teenage drama "Wie Feuer und Flamme" ("Never Mind The Wall", 2001) and in the late afternoon TV series "Sternenfänger". After playing the leading female part in "Soloalbum" (2003), an adaptation of a novel by Benjamin Stuckrad-Barre, Tschirner made her stage debut in a production of "Trainspotting" at Deutsches Schauspielhaus in Hamburg. She then continued her movie career with Anno Saul's comedy "Kebab Connection" (2004). Besides her work as an actress, Tschirner was a presenter for MTV Germany and for "Radio Fritz", a Berlin-based radio station.

Tschirner established her reputation and special talent for sensitive yet self-confident and strong-willed characters with her following films: In "FC Venus" ("FC - Women with Balls ") Tschirner portrays a laddish soccer football player, and in Til Schweiger's "Keinohrhasen" she plays a day nursery teacher who hides her furious temper behind a "mousy" façade.

In her next film, the comedy "Mord ist mein Geschäft, Liebling", Tschirner again played a cute character that masks an unimagined temper. In the film, she plays a clumsy publisher's employee who falls in love with a contract killer without knowing about his profession. In the movie remake of the cult children's series "Die Vorstadtkrokodile", Nora Tschirner was seen as the mother of paralyzed Hannes.

She reprised the role in the sequels "Vorstadtkrokodile 2" and "Vorstadtkrokodile 3". In 2010, she also appeared in the childrens' film "Hier kommt Lola!" and played opposite Herbert Knaup in the romantic comedy "Bon Appetit". Following her parts in the tragiccomedy "Ein Tick anders" ("Alive and Ticking", 2011) and Matthias Schweighöfer's box office hit "What a Man" (2011), Tschirner starred in the romantic crime comedy "Offroad" (2012),  playing a young woman who leaves her dull life behind and tries to finance her new existence by selling cocaine she accidentally found hidden in her car.

At the Hofer Filmtage 2012, Tschirner presented her directorial debut, the documentary "Waiting Area" (together with Natalie Beer), about the sometimes arduous everyday life of four Ethiopian mothers and pregnant women who live in very different circumstances.

In 2013, she starred in the romantic comedy "Liebe und andere Turbulenzen" ("Girl on a Bicycle") and played the single mother of a boy with Asperger in the Austrian children's film "Das Pferd auf dem Balkon". The same year, she and co-star Christian Ulmen made their debut as the leading duo of the new Weimar branch of the "Tatort" series - for which she won a Romy for Most Popular Female Series Star in 2015.

After her turns in the comedies "Alles ist Liebe" (2014), "Macho Man" (2015) and "Gut zu Vögeln" (2016), Nora Tschirner was one of the leads in Karoline Herfurth's directorial debut "SMS für dich" (2016). Nora Tschirner was also one of the producers of the Australian documentary feature "Embrace". She also appeared in the film, which was released in Germany in 2017 and addresses the problem of body shaming. She also continued her role as police detective Kira Dorn in the Weimar branch of the "Tatort" TV series.

Tschirner was cast as the female lead in the screen adaptation of the bestselling novel "Gut gegen Nordwind" ("The Space Between the Lines"), in which a homemaker and mother gradually falls in love with a man she only knows through E-mail correspondence.

In 2019, Tschirner received another Romy nomination in the category "Most Popular Female Star in a Series" for her role as the detective in the "Tatort" series. The theatrical release of the episodic film "Wunderschön" (director: Karoline Herfurth), which was originally scheduled for 2020 had to be postponed due to the Coronavirus pandemic. The film humorously deals with the sense and nonsense of the modern beauty craze in loosely linked storylines focusing on a variety of very different women.

In May 2021 the comedy series "The Mopes" started, in which a successful musician is confronted with depression that takes shape in the form of a woman played by Nora Tschirner. In a way, this role was also a bit autobiographical, since Tschirner herself, according to her own statement, was ill with depression for some time.