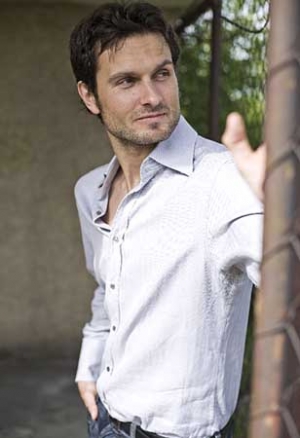 Simon Verhoeven was born in Munich on June 20 1972 as the son of actress Senta Berger and director Michael Verhoeven. Following his high school graduation in 1991, he enrolled at the Lee Strasberg Theatre Institute in New York to study acting, but eventually quit after one year. He then studied Jazz composition and film music at the Berklee College of Music in Boston. During that time, he also wrote score music for his father's film "Mutters Courage".

His dream of becoming a writer-director finally materialized when he was accepted at the NYU's renowned Tisch School of Arts. He graduated in 1999 and one year later completed "100 Pro", his first feature-length film as director, writer and composer. The film was nominated for the Förderpreis Deutscher Film. In 2003, Verhoeven – who was a promising football talent in his youth – played German side legend Ottmar Walter in Sönke Wortmann's "Das Wunder von Bern". He continued to act, appearing amongst others in Doris Dörrie's "Der Fischer und seine Frau", Peter Gersina's "Mädchen, Mädchen 2 – Loft oder Liebe" and several TV productions. In 2008, he played the role of Jürgen Vietor in "Mogadischu", Roland Suso Richter's TV dramatization of the 1977 hijacking of German aircraft "Landhut". The film went on to win two Golden Cameras and the 2009 German Television Award.

He returned to the director's chair with "Männerherzen", for which he also wrote the screenplay. The comedy starring Christian Ulmen, Til Schweiger and Nadja Uhl became a box office success and won the 2009 Bavarian Film Award for Best Screenplay. Verhoeven reassembled his cast for the 2011 sequel "Männerherzen...und die ganz, ganz große Liebe", which also succeeded. At the Bayerischer Filmpreis the comedy won the audience award.

In the next years, Simon Verhoeven very successfully directed commercials and made advertising spots for various large German corporations. A commercial for a music streaming platform gained widespread popularity because it presented Bastian Schweinsteiger's transfer from Bayern Munich to Manchester United in the style of a video clip.

In January 2016, another full length feature by Simon Verhoeven opened in the theaters: The thriller "Unfriend" is about a college student haunted by a seemingly demonic presence in a social network.

Verhoeven’s social comedy "Willkommen bei den Hartmanns" ("Welcome to Germany", 2016) about a German family taking in an African asylum seeker was a huge success. With over 3.8 million visitors, the film advanced to become the most successful German production of 2016. At the Munich Film Festival in 2017, it won the German Film Peace Prize ‘Die Brücke’ and the National Director's Prize; at the Bavarian Film Prize in 2017, it was awarded Best Production and the Audience Prize.

He then shot a series of commercials for Sky, Telekom, Rewe and SKL, among others. In 2019, Verhoeven began shooting his next feature film, the romantic comedy "Nightlife" (release date: February 2020) about a romantic date that unexpectedly turns into a wild hunt through Berlin's nightlife.