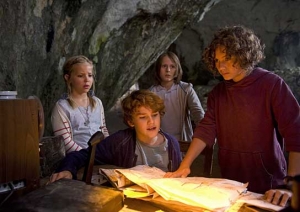 Based on the popular book series by Enid Blyton, the film centers around the five teenage friends and amateur detectives Julian, Dick, Anne, George and Timmy, the dog. The kids spend their vacation together, while George's dad Professor Quentin – a famous inventor – is staying on a nearby island where he works on a groundbreaking project which might bring forward new methods of using alternative energies. But one day, he disappears without notice, and the five friends are soon convinced that he was actually kidnapped. Determined to rescue Professor Quentin, they not only have to deal with thugs and gangsters, but also uncover a huge conspiracy.