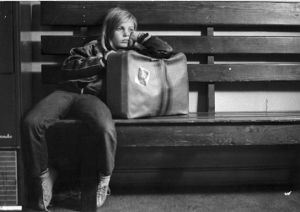 Alice in the Cities

After prematurely breaking off his trip to cover the heartlands of America, the journalist Philip gets acquainted with a young German woman and her eight year old daughter Alice in New York's Kennedy Airport. Spending the night with the mother, he finds next morning a slip of paper with a message asking him to take Alice with him to Amsterdam – she would meet up with them in a few days.

After waiting in vain for Alice's mother to appear in Amsterdam, they both decide to look for Alice's grandmother together, despite not even having an address. Their only clue is a single photograph of a house. In their wandering adventure through the Ruhr region a quiet affection begins to develop between Philip and Alice, expressed through few words and conveyed in slight movements and gestures of the eye.