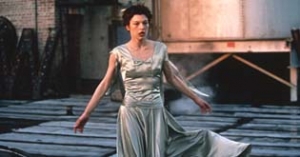 Their story is seen through the eyes of Tom Tom, a young man who serves them all like some sort of "Beggar′s Butler". He has a childlike, innocent mind. Tom Tom has fallen head over heels for the tarnished street angel Eloise. As their relationship develops, the Million Dollar Hotel becomes the focus of a police investigation: one of its residents, the engaging junkie Izzy, has come to a grisly end. He fell off the roof. Or was he pushed? To the amazement of his neighbors, he is revealed to have been son of a billionaire media magnate. Every inhabitant of the Million Dollar Hotel falls under suspicion in the enquiry led by FBI hardliner, Detective Skinner. As Skinner′s investigation proceeds, the lines between murder and suicide, sane and deranged, become very blurred indeed.