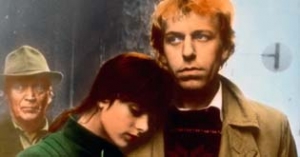 False Movement / The Wrong Move
Wim Wender′s film is a free adaptation of Goethe′s "Wilhelm Meisters Lehrjahre" ("Wilhelm Meister′s Apprenticeship"). The main protagonist is a cinematic successor of Goethe′s character Wilhelm Meister. Wilhelm wants to be a writer and but lacks the interest in what is going on in society, a major quality in order to become a successful writer. To cure him from his detachment, his mother sends him on an adventurous and educational journey. On this journey, Wilhelm meets a lot of strange people and finds himself in various extraordinary places from the top of Zugspitze to a villa in the Siebengebirge. But during his journey he happens to concede the fact that he is not able to get involved with other people.