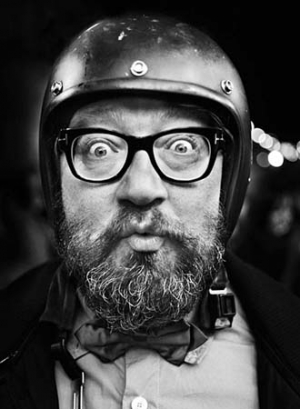 Heiko Pinkowski was born in Krefeld in 1966. Already as a minor, he performed in stage productions of the children's theatre in Krefeld. He began to study engineering, German literature and philosophy, yet he eventually dropped out of each class. He then had jobs as a draughtsman, orderly, and truck driver, before returning to the stage in the early 1990s. Starting out at the Stadttheater in Krefeld, he later performed at the Schillertheater in Berlin, the Bauhausbühne in Dessau and the Theater der Landeshauptstadt in Magdeburg.

In 2001, he took his family to Berlin where he continues to live and work as an actor. In addition to his stage career, Pinkowski has been working in film and television since 2004. His screen credits include guest-starring roles in TV series like "Tatort" and "Die Stein", and parts in theatrical releases like "Jagdhunde" ("Hounds", 2007), "Barfuß bis zum Hals" ("Barefoot to the Neck", 2009) and Doris Dörrie's "Die Friseuse" ("The Hairdresser", 2010).

Follwing supporting roles in "Puppe, Icke & der Dicke" ("Doll, the Fatso & Me", 2012) and "Kohlhaas oder die Verhältnismäßigkeit der Mittel" ("Kohlhaas Or The Proportionality of Means", 2012), Pinkowski again teamed up with Ranisch to be one of the leads in the acclaimed tragicomedy "Ich fühl mich Disco" ("I Feel Like Disco", 2013). He also starred in Ranisch's next film ""Reuber" (2013), playing a cantankerous robber in a fairy-tale like story.

Following a string of supporting roles in TV productions, Heiko Pinkowski was cast in the Serbian release "Otvoreni kavez" ("Open Cage"), the mystery thriller "Sibylle" and "Ich bin dann mal weg", the screen adaption of the eponymous bestselling novel by Hape Kerkeling. In 2015, Pinkowski starred in the Ranisch tragicomedy "Alki Alki", as a husband and family man who puts the relationship to his loved ones at risk because he enjoys indulging in binge drinking with his best friend way too much.

In 2016 he appeared in supporting roles in the crook comedy "Schrotten!" ("Scrappin'"), in the children's film "Rico, Oskar und der Diebstahlstein" ("Rico, Oskar and the Mysterious Stone") and in the abuse drama "Die Hände meiner Mutter" ("Hands of a Mother"). In Achim Bornhak's modern-experimental Shakespeare adaptation "Shakespeares letzte Runde" (2016, TV) he impersonated Falstaff and in the comedy "Schlimmer geht’s immer" (2016, TV) he played a hapless do-it-yourselfer. He had further television roles in Hermine Huntgeburth's adaptation of the Ulla Hahn novel "Aufbruch" ("Departure", 2016) and in the third and fourth season of the hospital series "Bettys Diagnose" (2017).

Ute Wieland cast Pinkowski for her youth drama "Tigermilch" ("Tiger Milk", 2017) as the stepfather of one of the young protagonists; in the excellent tragicomedy "Lux - Krieger des Lichts" ("Lux: Warrior of Light", 2017) he played a leading role as a producer who wants to finance a film about a self-proclaimed "superhero for social justice".