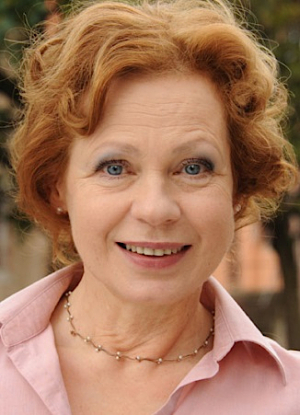 Renate Krößner, born May 17, 1945, in Osterode am Harz, grew up in East Berlin where she went to school, played in a layman theatre and graduated with a diploma from the national drama school. After performing at several smaller theatres, she became a cast member of the theatre in Brandenburg in 1971. In 1965, Renate Krößner made her movie debut in "Tiefe Furchen". In the same year, she also appeared on television for the first time. Until the mid-1970s, Krößner was regularly seen in TV productions. In 1980, Krößner became internationally known for her performance in the leading role as pop singer Ingrid Sommer in Konrad Wolf's and Wolfgang Kohlhaase's "Solo Sunny", a film that – despite being very successful – provoked a lot of controversy in the GDR, not least for Krößner's portrayal of the non-conformist and indidivual Sunny that revealed a lot of Krößner's own personality.

Despite her success as Sunny, Krößner did not star in many roles during the following years, her most important roles being resolute Else in the TV five-part series "Verflucht und geliebt" and the title role in the Fontane adaptation "Mathilde Möhring". In 1983, she starred in the TV movie "Die ewigen Gefühle", a film that was shot in the GDR as a service for the West German TV station WDR.

After her migration to West Berlin in July of 1985, Krößner worked exclusively for TV productions until the beginning of the 1990 besides several guest performances at theatres. She became known to a larger audience in her role as Anja in the TV series "Liebling Kreuzberg" and with several appearances in the "Tatort" crime series. In 1992, Krößner won the German film award for her performance as the barkeeper's wife Uschi Klamm in Adolf Winkelmann's football fan drama "Nordkurve" ("North Curve"). Krößner then starred in numerous TV movies such as Manfred Stelzer's comedy "Grüß Gott, Genosse" und Dominik Graf's TV crime film "Der Skorpion" ("The Scorpion").

From 1998 to 2002, Renate Krößner played the wife of detective chief superintendent Wilfried Stubbe (Wolfgang Stumph) in the popular crime series "Von Fall zu Fall". During the 1990s, Krößner only sporadically appeared on the big screen, mainly in supporting roles as in the adaptation of the novel "Helden wie wir" ("Heroes Like Us", 1999), in Jobst Oetzmann's drama "Die Einsamkeit der Krokodile" ("The Loneliness of the Crocodiles", 2000) and in Werner Herzog's "Unbesiegbar" ("Invincible", 2001), among others. Dani Levy cast her as club manager in his comedy "Alles auf Zucker!" ("Go For Zucker") in 2004, and in the same year she played the leading role of a hardened, black-humorous chief inspector in the six-part ZDF crime series "Einmal Bulle, immer Bulle". In Thomas Schadt's TV film biography "Carola Stern - Doppelleben" she played the publicist at a mature age. She also appeared in the award-winning drama "Mondscheinkinder" ("Children of the Moon", 2006) by Manuela Stacke.

Krößner had an impressive appearance in a 13-minute short film in 2008 in "Dunkelrot" by Frauke Thielecke as a person suffering from Alzheimer's disease. While she was still very much present on television, her appearances on the big screen got quite seldom.

In 2011 in Andreas Kannengießer's drama "Vergiss dein Ende" ("Way Home"), she wants to break out of her dreary existence as a nurse to her demented husband. For this role she won the award for Best Actress at the Turin Film Festival (Italy). After that Krößner again appeared in a number of television productions. In Titus Selge's family comedies "Überleben an der Wickelfront" (2012) and "Überleben an der Scheidungsfront" (2015) she had a smaller role as the on-screen mother of Valerie Niehaus; she was also the mother of the main character in the mystery melodrama "Ohne Dich" (2014) and in the family drama "Unterm Eis" (2015). She also took on guest roles in various TV series.

In July 2015 the feature film "Marry Me!" was released, with Krößner in a supporting role as an East Berliner. Friedemann Fromm cast her in the TV multi-parter "Die Stadt und die Macht" (2016), a mixture of political thriller and family drama, as the mentally ill wife of a ruthlessly power-hungry Berlin politician (Thomas Thieme) and mother of an idealistic lawyer (Anna Loos). Also in 2016 Krößner had a guest appearance as the wife of millionaire Elise Romberger in three episodes of the long-running German cult series "Lindenstraße".

From 2017 to 2019 she played a leading role as the mother of the title character in the series "Der Lehrer". She also continued to appear in TV movies. In Max Zähle's crime thriller "Der steinerne Gast" (2018), for example, she played the widow of a murdered jeweller, and was part of the ensemble of Bettina Blümner's "Fluss des Lebens - Kwai: Familienbande" (2019).

Renate Krößner was married to the actor Bernd Stegemann. Their son Eugen also works as an actor. Renate Krößner lived in Mahlow, south of Berlin, where she died on May 25, 2020, only a few days after her 75th birthday.