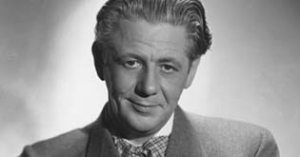 Born on the 29th of April, 1894 in Budapest, Paul Hörbiger grew up in Vienna and Kärnten. A war volunteer between 1914 and 1918, he later completes his short actor training in Vienna, performing in various theaters, including among others in Prague and Berlin.

In silent film Hörbiger takes on both comedy roles – like for example the servant and chauffeur in Fritz Lang’s "Spione" – as well as those of villainous characters. His film image is subsequently shaped by the sound film comedies and operettas of Geza von Bolvary and Erik Charell, best seen in the warm-hearted Viennese character "Feschak", and most clearly in the figure of the old Weiring in Max Ophüls’ "Liebelei". In 1935, he is involved in the founding of the Allgemeine Film-Aufnahme und Vertriebs GmbH (Algefa) in Berlin.

While his performances cover a rather similar range of roles as that of his prefered partner Hans Moser, Hörbiger’s are less bad-natured. They include such roles as man servants, court councillors, noblemen as well as ballad-singers and singers during wine festivities. He also frequently plays such Austrian greats as Franz Joseph the II., Haydn or Radetzky.

From 1940 to 1944, Hörbiger takes on various theater engagements. In 1945 he is arrested and accused of high treason in Vienna. After the war, he has stage appearances in Zürich, Moscow and New York as well as in West Germany and Israel.

In post-war cinema he at first plays more demanding roles like for instance the character of the intimidated doorman in Carol Reed’s "The Third Man". Yet, soon the old stereotypical roles of the 1930s and 1940s return, now in the form of Viennese swindel films and German Heimat films. In 1969 he receives the Film Band Award for his exceptional and long-standing contribution to German cinema.