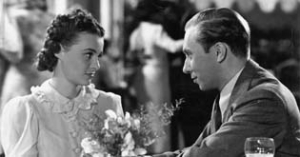 The young, attractive Inge Wagner becomes acquainted with Herbert Koch during the Berlin Olympics, his flight officer insignia having first caught her eye. Sparks fly immediately between the two and they soon decide to marry. But before their wish becomes reality, Herbert is called off on a secret mission in Spain. Because he is sworn to complete secrecy, he cannot even say goodbye to Inge.

During the war, the radio program "Wunschkonzert" ("Request Concert") is one of the ties between "Home and Front". On this program, greetings could be broadcast and music requests fulfilled. One day Inge hears a greeting from her Herbert. Overjoyed to finally hear from him, she finds new courage. She arranges a meeting by letter, suggesting they meet in Hamburg, as soon as Herbert can come back home. A fatality and unfortunate misunderstanding nearly prevent the couple from embracing one another. National Socialist propaganda film under the guise of a contemporary love story.